BREAKING: Ben Stiller To Direct And Star In THE SECRET LIFE OF WALTER MITTY 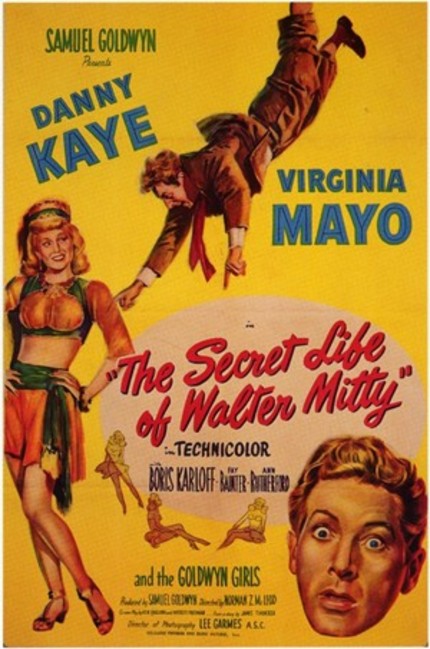 It seems that Ben Stiller's choices as an actor too often color people's opinions of Stiller's skills as a director. Which is quite a shame, really. Because while Stiller will seemingly keep taking every Focker and Museum flick tossed his way as an actor - and laugh all the way to the bank, no doubt - he has proven himself several times now to be quite a unique voice in the director's seat. Though Stiller has only four features to his credit, one (Reality Bites) is a widely acclaimed indie while the three studio pictures (The Cable Guy, Zoolander and Tropic Thunder) are all surprisingly dark and weirdly subversive comedies. And now ScreenAnarchy has learned that Stiller's next directing project will be the upcoming remake of 1947 comedy The Secret Life Of Walter Mitty.

Stiller's name was first mentioned in connection with the project back in April when Deadline reported that he was in talks to take over the lead role. Stiller has, indeed, signed up to take the part but at the time producers were still on the hunt for someone to direct. Gore Verbinski was floated as a possibility at one point but now we have learned that Stiller himself will take over directing duties as well as starring.

If there's one movie Danny Kaye fans fondly remember, it's The Secret Life of Walter Mitty. The versatile comedian--also an unsurpassed song-and-dance man--plays a henpecked, thriller-genre book writer suddenly enmeshed in a real adventure involving the (literal) girl of his dreams (Virginia Mayo). Initially criticized for not staying true to the more melancholic sensibility of author James Thurber's original story (Thurber allegedly offered producer Samuel Goldwyn $10,000 to not make the film), it not only works as an independent story, but remains highly entertaining and wears well upon repeated viewing. Kaye's milquetoast Walter fantasizes distractedly about being heroic, whether a gunslinger, an Air Force pilot, or a riverboat gambler. His "Anatole of Paris" number, in which Walter fancies himself a French hat designer who, in the end, declares he hates women, is nothing short of brilliant. That number, like many of Kaye's trademark patter deliveries, was penned by his wife, Sylvia Fine. Kaye benefits from a wonderful supporting cast: Mayo; Boris Karloff as maniacal Dr. Hugo Hollingshead; Faye Bainter as Walter's repressive but lively mother; Ann Rutherford as his suspicious fiancée Gertrude; and Gordon Jones as Tubby, who not only has designs on Gertrude, but provides the villain in Walter's fantasies.

More about The Secret Life Of Walter Mitty