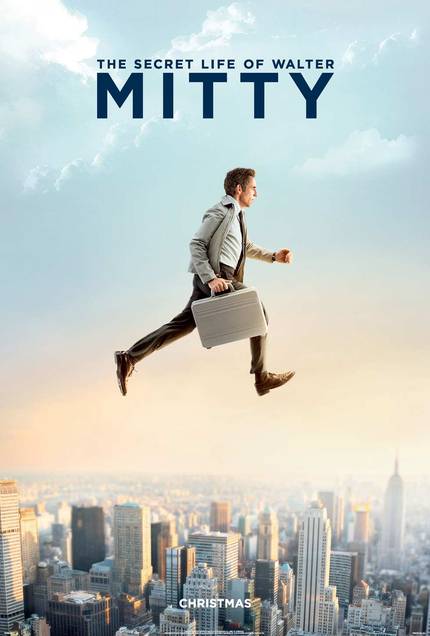 Imagine a would-be studio blockbuster that sets out to be all things to all audiences, a soaring positive journey of a film that manages to include a bit of social observation; an entertaining winner on all fronts.
This is the film The Secret Life of Walter Mitty imagines itself to be, never realizing its true fate lies in a $7 Blu-ray bin eight months from now, amid other such generic, quickly forgotten behemoths. That doesn't mean Mitty is a bad movie, but that's the type of movie it is:  well-meaning, but delusional - just like its lead character. It may appear to be a big thing, but in actuality, it's a one man show.
That one man is the film's director and star, Ben Stiller. Throughout his career, he's never let the worst kind of mainstream success stand in the way of the detached edginess that marks his more esteemed failures. Whether he's holding court with miniaturized historical figures in Night at the Museum or being made up into a Na'vi on Oscar night in faux humiliation or scoring in Greenberg, he makes sure he never loses that trademark glassy glower that punctuates all his roles.
The question as to how Stiller came to be granted the keys to this massive project is a curious one. With TV's The Ben Stiller Show, this son of a beloved showbiz couple hit the culture as a kind of Welles-ian wunderkind. The sketch comedy show was short-lived, but has since acquired a well-earned cult following. Stiller's television ratings failure earned him a shot on the big screen with Reality Bites, as he adopted the mantle of Ironic Comic Wit of the hipper-than-thou early 1990s alternative youth scene.
But like so much of what's successfully "alternative," Stiller gravitated into the mainstream. And not just the mainstream, but the mainstream of the mainstream. If Rolling Stone magazine wouldn't have him anymore, Parade magazine certainly would. Nowadays, Stiller's cooly-wound exasperated every-man persona is old hat. The parade's gone by.
In Walter Mitty, Stiller finds himself in Life magazine, quite literally. He's working as a film archivist in the bowels of the building, all of which has been corporately overtaken by a pack of self-assured blowhards lead by Adam Scott, who spends the movie in a bad paste-on beard only so Stiller and company can mock it. They inform the employees that Life as we know it (the print version) will soon end, and the whole thing will be rebranded for the web. And with this change, there are going to be some cutbacks and layoffs. So, despite being based upon a seventy-five year old short story by James Thurber, this Secret Life of Walter Mitty is also a recession/internet age/changing times movie. It may barely resemble the source material, but it is all just so now...!
It's a movie for the working joe who's just trying to get by, but made by millionaires who can't possibly know what it's really like out there as they bask in the 20th Century Fox green light of their massive reimagining of a 20th century classic story. Stiller plays Walter Mitty, a weak willed dweeb prone to introverted flights of fancy that outwardly appear to everyone else as a man out of batteries, but to us as over-engineered big budget action movie highlights. In his daydreams, Walter dives through skyscraper windows into busy traffic below to save the woman he secretly pines for (Kristen Wiig, who is everywhere this holiday season). These punchy fantasy sequences are the film's high points, but as Walter's real life becomes more adventurous, they vanish from the film's second half.
The Secret Life of Walter Mitty is a huge, huge Hollywood production and shameless Ben Stiller vehicle, courtesy of Ben Stiller and Fox, and brought to us by Papa John's Pizza, Life Magazine, eHarmony.com, and Cinnabon. Making the movie into an egregious product placement dumping ground may've helped pay the production bills, but it also converted an otherwise okay movie into an egregious product placement dumping ground. Subtract 1000 points of cool credit from Patton Oswalt, who plays a pesky eHarmony rep who eventually meets Stiller for a Cinnabon. Half of that short scene is spent discussing how good Cinnabon is. Not sweet at all, Mitty.
But the real problem with the film is one of subtly confused tone. At its core, The Secret Live of Walter Mitty is aching to be an old fashioned Frank Capra style story for the modern era. For that reason, this would've made for an ideal Cameron Crowe production, Crowe being the rare director who's magnetic love for what he adores in contemporary pop culture communicates with near-childlike enthusiasm and purity.
Stiller, ever brandishing his hip edge at least to some degree, is incapable of hitting this note, despite his having peppered Mitty with just the kind of pop cultural daydream fusion that Crowe's Vanilla Sky (for any of it's failings) absolutely nailed. Early on, Mitty wanders a hallway of iconic Life magazine covers, all them, in his mind, now featuring him. It's a grace note that should be more telling, and in fact goes nowhere. It simply cannot compare to when Tom Cruise imagined himself wandering the cover of "The Freewheelin' Bob Dylan" as a representation of his deep connection to the meaningful pop arts that have shaped him. In Walter Mitty, it pays off only as would-be wish fulfillment fantasy. 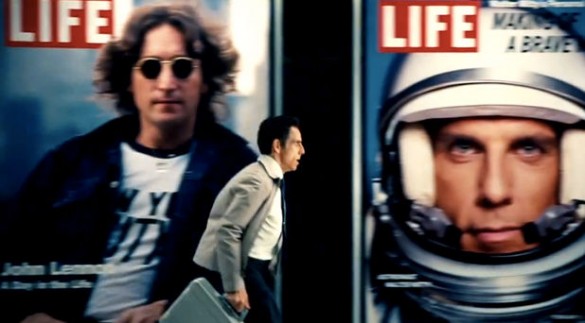 It's all surface, and for a film that purports to be about the internal, it could be so much more. Some of its ideas and themes of escapism in the face of a changing and difficult world land better than others, making for a film that's enjoyable, but merely enjoyable in an utterly disposable way. As Mitty sets off across the globe in search of an elusive photographer (Sean Penn, cameoing), we learn that Walter was in fact once cool, and forsook that to be a nobody.
But instead of probing the inner coils of what it means to be a "nobody" (as most of us are), we learn that Walter is in fact a ridiculously amazing skateboarder, soaring down scenic foreign hillsides while the music swells. It's one of several moments when Stiller just can't stand the "Capra-corn" he should be making, and simply must be a cool movie star, if only for a glaring moment. Walter pushes himself to complete his quest even when he no longer needs to, which is admirable. But only in a film such as this one could such a shlub as we're told he is actually afford such a venture. It's just one way that The Secret Life of Walter Mitty is ultimately, just one inch beneath it's crowd-pleasing and detailed surface, disingenuous.
In the end, Mitty will have not only come back to down to Earth, but will have traveled all over it, realizing that the ones you love are what truly matter. But also, reality bites. This may be the takeaway Ben Stiller imagined as he uncomfortably straddles his mainstream persona and his alternative culture ironist past, unable to effectively blend one with the other. You could do far worse than this Walter Mitty, but don't expect to see it on any magazine covers in real life.
Sign-In to Vote
Tweet 0 Submit

Do you feel this content is inappropriate or infringes upon your rights? Click here to report it, or see our DMCA policy.
Adam ScottBen StillercomedyKristen WiigSean PennShirley MacClaineshort storyThe Secret Life of Walter Mitty

More about The Secret Life Of Walter Mitty

I agree with all of this and I haven't watched it. I don't plan to either- I got the same impression from the unnecessarily long trailer they had to force-feed us in the cinema (complete with Ben himself, telling us why we should watch it)

Very interesting review. I've read a couple of other reviews about this movie, and they all (plus this one) seem to be far more interesting than the movie itself. I was never going to watch this movie anyway, but the reviews and comments have been an interesting read (that's three times "interesting")

Two of the comments below are from people who have not seen it, and the other one is from a person who hates Stiller. You should all see the movie with an open mind before you bash it.

I saw this movie last night, and I do agree with the product placement angle as well as it being an obvious Ben Stiller vehicle. But, it is an enjoyable film, with beautiful cinematography, chilled out music, a few good laughs, and it does what it set out to do, which is to create an escapist adventure for all of us 'dreamers' out there.

Go and see it on a tight arse Tuesday :)

Jim and I have very different takes on films usually - in this case, he didn't like this film, I would have ripped it apart even more. As he notes, however, it's more forgettable than anything, inexcusable given the run of some pretty magnificent films in theatres right now far more deserving of your time.

I found this movie to be amazing, thought it was a feel-good ride. I have heard lots of others agree, but to each his own. If anything, watch it before forming opinions, then hate or love it, but not before, ya freaking sheep lol ;)