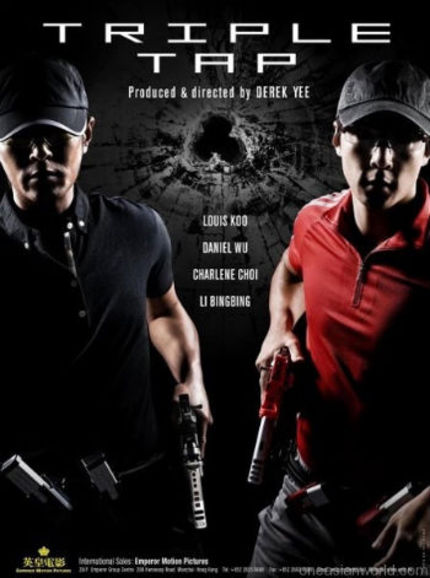 Harkening back to the golden era of Hong Kong cops 'n' criminals flicks, Derek Yee's Triple Tap kicks off with not one, but two high-adrenaline action sequences before settling down to tell its story. A sequel, of sorts, to Double Tap, released in 2000, the new film again features a civilian and a police inspector who are expert marksmen.

Ken Kwan (Louis Koo) is a successful investment banker who wins a shooting competition with a rare "triple tap" (three shots fired into the same spot), narrowly defeating the best efforts of Chong (Daniel Wu). But the glum-looking Kwan doesn't seem to take any joy in his victory, grabbing his trophy and heading back to his office to work overtime. On his way back, he comes upon an armed robbery; when a traffic officer intervenes and is quickly overwhelmed, Kwan takes matters into his own hands to save the cop, killing three of the robbers.

His path crosses again with Chong, who is the CID inspector in charge of the case. All told, seven people were killed, the cop is still in a coma, and the surviving suspect escaped, leaving plenty of questions behind. For one thing, Kwan's conduct doesn't seem to add up. How -- and why -- did a brilliant, apparently mild-mannered broker instantly transform into a killing machine?

The script, written by Yee, Chun Tin Nam, and Lau Ho Leung, scatters clues; some are more obvious than others. We know something is off with Kwan, but it's not initially clear what, exactly, is making him so blue. Is it romantic tribulations? He has a live-in girlfriend, a nurse named Ting (Charlene Choi), but Anna Shaw (Li Bingbing), his boss at the investment firm, treats him in an intimate, familiar manner. Is it financial troubles? He seems to be successful, but when he stares furtively at his computer screen and transfers large amount of money from one account to another, we know something's not right, especially when we learn that $400 million in bearer bonds are still missing from the armed robbery.

Louis Koo exudes exactly the right kind of brooding despair for his character, even though we never get a firm fix on what drove him to the point where everything goes wrong. Daniel Wu snaps out orders as you might expect from a CID inspector. Chapman To, as one of the robbers, and Lam Suet, as the "inside man," bring their usual energy to supporting parts. In a callback to the earlier film, Alex Fong nicely reprises his role as Mew, now transferred to a seaside precint.

Triple Tap starts with a burst of energy: the shooting competition is captured in a series of quick shots, followed almost immediately by the extended armed robbery sequence, which is dynamically staged. What follows is a tense police procedural. Somewhere along the line, however, the energy begins to flag, and the concluding action sequence, which should bookend the film, is a bit of a letdown. To say more would probably spoil things.

Maybe it's my own memories of Double Tap that get in the way. I have the DVD, but I haven't watched it in many years. As I recall, though, Leslie Cheung was indelibly chilling, and Lo Chi Leung, who would go on to make the excellent Inner Senses and the nerve-jangling Koma, made a stunning debut as director.

That's not to blunt the accomplishments of Triple Tap, but to place them in context. It's a good, solid drama, not one to set your hair on fire, yet worth seeking out.

Triple Tap had one screening earlier today at the Asian Film Festival of Dallas. The film was released by Vicol Entertainment on DVD (Region 3) and Blu-ray (Region Free) and is available from specialty retailers.