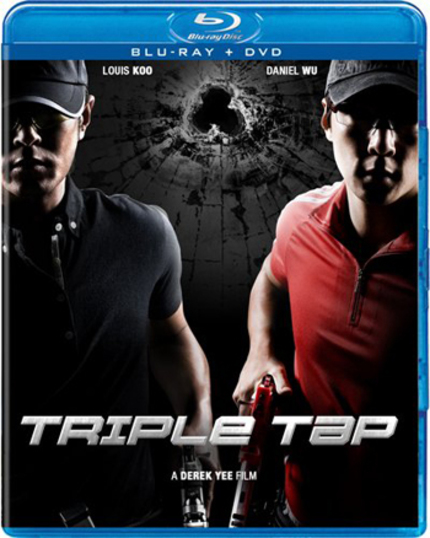 Director Derek Yee teams up with regular collaborators Daniel Wu and Louis Koo for another tense Hong Kong crime drama in Triple Tap.  The film follows a pair or expert sharp shooters unexpectedly pitted against one another in a game of cat and mouse.  Derek Yee's direction is confident and effective, while Wu's cool countenance keeps the film moving. The wild card in this film for me is Louis Koo, whose performance didn't exactly ring my bell, but may not be as disappointing to others.  Whatever your opinion on the film, Well Go USA has put together another stellar A/V specimen with Triple Tap, further proof that it is well worth waiting for their Blu-ray releases rather than importing the pricy HK originals.

Champion competitive marksman Ken Kwan (Louis Koo) comes across an armored van robbery. He sees a policeman being held hostage and shoots and kills four of the robbers. One of the robbers escapes and the policeman survives. The case is handled by Officer Jerry Chong (Daniel Wu), a fellow competitive shooting enthusiast whom Ken has recently defeated in a match. The two men had befriended each other after the competition. Although Ken's actions were controversial in heavily gun-controlled Hong Kong, the court finds him to be not guilty and he is released a hero. Soon after, Ken is attacked by the escaped robber Pang Tao. Their confrontation opens up a very different background story and brings about a myriad of lies and traps and changes in relationship as Jerry and Ken try to outsmart each other.

Triple Tap is a solid enough procedural, but not one to set the world on fire.  I'm a huge fan of Yee and Wu's previous collaboration One Night in Mongkok, but this comes off as a little bit too slick for me.  The film takes place in the present day, using the international financial breakdown as a jumping off point for the drama and desperation that inspires a heist. This seems to be a recurring theme in HK cinema, with Pang Ho Cheung's Dream Home charting similar territory to very different effect. That Triple Tap is probably the weakest of Well Go's Emperor acquisitions in 2010 says a lot for Well Go's high bar for quality.

If there is anything that the film can in no way be faulted for, it is the direction and cinematography.  Yee's got a great eye for action and framing, and the film looks very good. I kind of wish that they'd spent a little bit more time in the dirt though, as it makes it a bit difficult to sympathize with characters when they are burning cash building homes in Phuket. Thankfully, the actors in the film are very solid for the most part.

Since there are only about 20 actors in Hong Kong, every film is like shaking a Yahtzee cup to see who ends up in the latest feature.  Triple Tap pulled a pretty good team.  Wu is a solid actor, if baby faced and occasionally hard to take seriously.  However, he is backed by a brief but effective appearance from Suet Lam, and an manic performance from Chapman To as a scape goat for the heist that gets this whole ball rolling in the first place.  Louis Koo's performance is a bit of a mystery to me.  He looks shell shocked through the entire film, which I could see as a part of his character, but he never manages to break out of it, even when it isn't appropriate.  It's a small thing in big picture, but it was really the only criticism I had of the film.

Triple Tap isn't the best film to come out of Hong Kong in the last year, but it is very good and a worthy addition to the HK crime cannon. If you go in with no expectations, I expect you'll come out the other end pretty happy.

As I mentioned above, Well Go USA is one of the companies in whom I can place my trust when it comes to quality Blu-ray releases. Even though this is a newer film, and they don't often exhibit a lot of visible grain, there is a small amount of very organic looking grain in the image's darker moments.  It is very refreshing to see film and something that you just can't get from standard definition images anymore. The films looks great, no complaints.  Another thing we can thankfully count on from Well Go is high quality bombastic audio tracks, and Triple Tap is no exception.  There are only brief outbursts of surround friendly action, but they are all tackled very well, and while the film on the whole probably won't test your system, the sound is nice and clear and every sound is easily discernible.

The extras don't sound like much when listed, but there are tons of them.  The deleted scenes are pretty short and inexplicably contain a couple of car chases scenes that are completely missing from the film.  Aren't car chases expensive to film?  You'd think they would want to use those.  The real gem are the interviews, though.  There are tons of them with all of the principles, all presumably ported over from the HK Blu-ray edition.  The only thing lacking, and this is completely subjective, is original extra content, that would bump Well Go's home video releases to the next level.  Apart from that, this is a very competent, high quality release.  Buy with confidence!