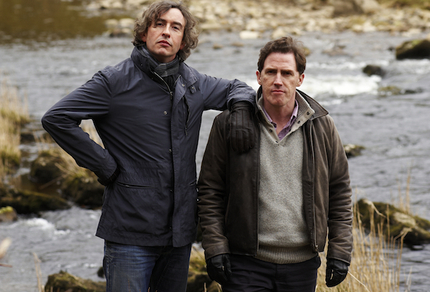 [With "The Trip" opening in most major U.S. markets tomorrow, now seems a good time to revisit my review from last April's Tribeca.]

I hereby subtitle this review of Michael Winterbottom's The Trip, "The Misadventures of the Dueling Caines" or "A Couple of Bumless Chums." I also acknowledge my colleague, Peter Martin for coining the term "Dueling Caines," after the sort of comedic catalyst that happens when Steve Coogan and Rob Brydon whip out their vastly different (both equally good) Michael Caine impressions.


And, before we go any further I do invite you to read this review (out loud if possible) in your best Michael Caine voice. Okay then, shall we?


Taking a page from their previous collaboration with Winterbottom, Tristram Shandy: A Cock And Bull Story, Coogan and Brydon play loose versions of themselves, out on the road, taking in the landscapes of Northern England and the upscale dining establishments nestled in its sleepy hamlets. Coogan has signed on to do an article about the food from each spot, and his on-the-outs American girlfriend has bailed on him, so he calls up Brydon, apparently after many other potential travel companions have said no.


Both men ooze their own unique brand of charisma. Coogan is the quiet womanizer, the serious one, who wants to be as far away from cheap laughs as possible, but can't help himself when Brydon gets the impressions going. Brydon is the man of a thousand voices, an out and out family man, and maybe a little clueless as to when to turn it all off. It's a fantastic odd couple pairing, that kept my jaw constantly sore from laughing. Now surprisingly - or perhaps not, since the best odd couples end up like this - the film shapes a rather poignant contrast between the two men, a contrast that maybe isn't as thick as Coogan wishes it to be.


The metaphors run easily. Even as easily as when Brydon yells out to Coogan who is stuck on a stone surrounded by water, "it's a metaphor!" This is of course very funny and not in the least bit nuanced, but the story of Coogan as a sad, insecure man runs through every vein of The Trip, from the great big belly laughs to the smallest little gestures.


Coogan plans their route north using road maps and not a GPS because that's the way his dad did it. Upon stopping in to say hi to his folks, he finds himself being corrected by his dad, quite literally rerouted. What barely registers as a hug is painful to watch. At any chance he gets Coogan tells Brydon about the natural history of the landscape they are in, wherein the rather talky Brydon asks Coogan (who doesn't babble like a brook but rambles) to be quiet so he can appreciate the landscape in peace. Coogan then walks off and is accosted by a man who knows way too much about limestone. It is these touches that make the film work as a lovely travelogue, a gut-busting comedy, and perhaps most importantly a rather complex, albeit familiar, study on the perils of ego and greatness. The way Winterbotoom lassos in the largely improvised performances is well, just plain, awesome. As are, obviously, Coogan and Brydon.


Looking back over this review I'm somewhat relieved I didn't spoil a lot of the jokes, though I feel I should mention more funny bits too. Yes, the impressions of Michael Caine (and Sean Connory, Hugh Grant, Michael Sheen, Anthony Hopkins and countless others) are hilarious - and one must give special note to Brydon bestowing English poet, Colridge with the voice of Richard Burton - but they are not the out and out best things in the film, just a highlight. Emphasis on A highlight. Oh, and forgive the structuring of this review, but I should probably say a little bit more on Brydon...


...He is most definitely, perhaps annoyingly so, an entertainer. His early attempts at being a "foodie" cause him to say such things as, "It tastes of a child's garden." And when he asks his wife to have phone sex he starts to spout off things like, " Speaking of boiled eggs, I'm not wearing pajama bottoms!" He's an easy target for Coogan's bullying, but he takes it in a way that is incredibly enduring, staking a real claim in their friendship, which is, for the moment, probably the best "ship" Coogan has going.


So there you have it. I'm wildly enthusiastic about this one, and like at last year's Tribeca with Zonad, The Trip is going to be a hard one to beat for pure laughs. But as is evident it's more than that. A lot more. For all three main players involved this is perhaps one of their most mature and rewarding works yet.