NEON GENESIS EVANGELION 2.22 YOU CAN (NOT) ADVANCE Bluray Review 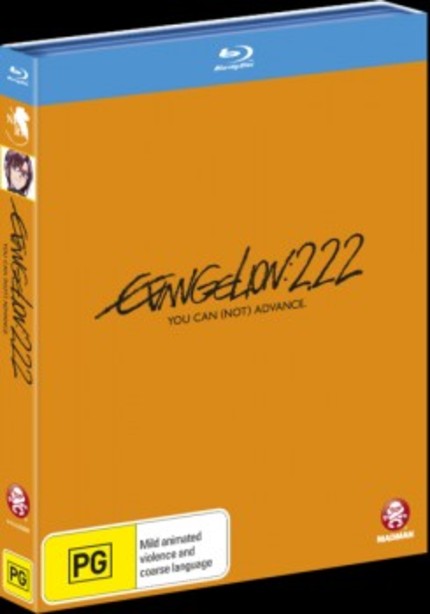 Immediately following the events of Evangelion 1.1 and with the deadly onslaught of the Angels incoming and the Third Impact looming, Shinji and Rei encounter two new Eva pilots; the wild Asuka and the mysterious, playful Mari. Bringing their Eva units into combat to fend off the angels is the least of their worries as the young souls fight desperately to save mankind and themselves as the Eva units transform into foe and something much more.


Evangelion 2.22 You Can (Not) Advance is a masterpiece. This may sound like hyperbole but it not only vastly improves on the already brilliant series and canon of film projects behind it, but easily stands out on its own as a powerful, entertaining and staggeringly gorgeous piece of work.

Evangelion 2.22 has taken a new and genuinely exciting alternate path and for die-hard fans this welcoming feeling of 'new' is a comforting and reassuring step and the best direction for the cult icon. During the opening credits a new and intriguing character is introduced and details emerge that were previously only references in the series and not expanded upon, until now. Before long the movie takes on a life of its own, building upon what is already known regarding the plot and subplots.

All of the positive elements of Evangelion are reworked and include stunning visuals, sharp dialogue, fast pacing and glorious battle scenes. Evangelion 2.22 also possesses a less serious demeanor which serves as a nice break from the extreme angst, depression and dysfunction of the series. Evangelion 2.22 is known as 'Break' in Japanese, and this is definitely the case as it has broken away from the familiar structure and lore, like an Eva unit would itself after becoming self-aware of the shackles that bind it.

It is not to the extreme however, this is still classic Evangelion; the references to past events, the fan service and yes some angst, but it is all handled in a more mature way and presented as a much more attractive package. Even the pilots, their individual complexes, attitudes and personalities of excessive stubbornness and unnatural depression which was prevalent in the series, is given a looser more human feel in Evangelion 2.22.

As in the series, each main character's introduction is given a very important focus; their entry to Tokyo-3 and NERV is completely revamped, updated and the execution is a love letter to all the fans, particularly the soundtrack, which is as strong as ever and an integral part of the intensity and sincerity.

Evangelion 2.22 places the story in the midst of what would normally be the half -way mark of the series. The intentions, secrets and plot are quickly revealed in an effortless way via witty dialog and straight-talking between Gendo, Kaji, Misato and the rest of the NERV staff. The pangs of nostalgia are only one of the highlights of Evangelion 2.22 because this project has essentially taken every great scene and enhanced it beyond the original. In line with the series, corruption and preservation are underlying themes that serve to support the central plot of the human instrumentality project, rebuilding life as we know it but half of the central concepts pertaining to this are given a complete re-haul.

Gainax have really upped the ante; everything is bigger, clearer and more immediate. Particularly the Angels who make their doomed trek to NERV HQ and the Geofront. Each one is seemingly more powerful and destructive than the last, in what is an uphill battle for the Evangelion units; each encounter raising the stakes higher than ever culminating into a truly jaw dropping climax.

Some of the changes are not quite as subtle, mainly to let long-time fans know that the changes are very intentional. In particular one scene with Toji losing a chocolate wrapper prize and stating "Damn didn't get lucky" in the midst of the scenario where NERV is choosing the new pilot for the Angel infected Evangelion. It even later shows him in hospital with his now recovered sister; another welcome deviation from the doom and gloom, as in the original series he was chosen to be a pilot and things did not go well for him.

In Evangelion 2.22 however, there can be no advancement as the title clearly stresses. As the unknown pilot of that infected Eva unit is severely injured. Shinji, although with much more humility and strength still 'runs away' after he finds out who it was that he unintentionally injures.


Regardless of what is new, revamped or reused, Evagelion 2.22 You Can (Not) Advance is better than the original series. It improves on each key sequence and story element in such a major way and it is hard to look back at what it was but it is also hard to advance. Each character is given more hope and more depth; Rei blocking Asuka's slap in the infamous long elevator ride scene was a very shocking but cathartic moment. Regardless, every element of the show recedes to welcome the inevitable apocalypse, only in Evagelion 2.22 it has been remixed in such a masterful way that it is truly hard to fault.


Bluray Extras
The Bluray extras, although varied and large, are ultimately quite disappointing, but do nothing to affect the brilliant feature length film and include the following:

Buy Neon Genesis Evangelion 2.22 You Can (Not) Advance on Bluray HERE