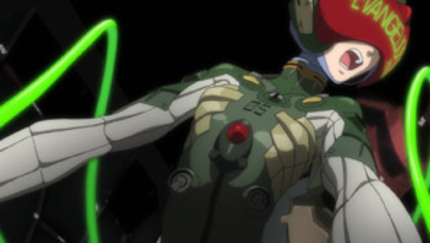 This is the first of three reviews as part of my post analysis covering the very well executed REEL Anime 2010 that wrapped up today in Melbourne and interstate. Overall it was an incredibly successful event (making the top 20 box office sales) held by Madman highlighting some seriously brilliant Japanese anime.

A gorgeously detailed, action packed but ultimately hollow package that focuses on the base elements of a cult sensation in order recap the series and draw in a new audience.

This is how I would not describe Evangelion 2.0: You Can (Not) Advance. The prior description applies solely to the barely reboot level of the phenomenon in the guise of 1.0 You Are (Not) Alone. Comparable to the delight of the wholly new and genuinely exciting alternate path that 2.0 has taken, for long-time fans of the show 1.0 is almost an irrelevant viewing and even slightly disappointing. This feeling followed me into 2.0, but after the opening credits; new and exciting characters and details emerged and before long the movie took on a life of its own, and is near perfect for it.

All of the positive elements of 1.0 are present here; the focus on stunning visuals and the less serious demeanour that is a nice break from the extreme angst of the series. 1.0, however, was far from perfect, and it seems Gainax have listened as 2.0 improves on it in every conceivable way. It is vintage Evangelion; the nods and winks to past events, the fan service and yes some angst, but it is all handled in a more mature way. In regards to the pacing every serious, comedic and action-oriented scene flows well into each other and this gives all of the characters a more grounded sense of realism as the mundane every day within the turmoil both internal and external are stressed. Even their attitudes and personalities of excessive stubbornness and unnatural depression in the series, is given a looser more human feel.

As in the series, each main character's introduction is given a very important feel; their entry to Tokyo-3 and NERV is completely revamped, updated and the execution is a love letter to all the fans, particularly the soundtrack, which is as strong as ever and an integral part of the intensity and sincerity of the battles and the various interactions in 2.0.

2.0 sets viewers in the midst of what would normally be the half -way mark of the series. The intentions, secrets and undeveloped plot are quickly revealed, in a seamless style of witty dialog and straight-talking between Gendo, Kaji, Misato and the rest of the cast. This time the cards are on the table and unlike the series, there is much more space to breathe and take all of this information in as it is newly revealed and diverges from the original. One famous scene from the series where Shinji helps Kaji water his garden is given more immediacy and impact here, as previous he states to Shinji "when I am gone, please water my melons" but in 2.0 he says, in a more believable manner "protect Katsuragi for me."

The pangs of nostalgia are the highlights of 2.0, essentially taking every great scene and enhancing it beyond the original. In line with the series corruption and preservation are underlying themes that serve to support the central plot of the human instrumentality project, rebuilding life as we know it and half of the central concepts are given a complete re-haul.

Gainax have really upped the ante, everything is bigger, clearer and more immediate, especially the Angels, as they make their way to NERV HQ and the Geofront, each one much more powerful and destructive than the last, in what is an uphill battle for the Evangelion units as each battle raises the stakes higher than ever culminating into a truly mouth-wide-open finale duel.

Some of the changes are not quite as subtle, mainly to let long-time fans know that the changes were intentional. I particularly enjoyed Toji losing a chocolate wrapper prize and stating "Damn didn't get lucky" in the midst of choosing the new pilot for the Angel Evangelion, it even later shows him in hospital with his now recovered sister; another welcome deviation from the doom and gloom. However, there can be no advancement as the title stresses, as the pilot of that Angel is severely injured. Shinji, although with much more humility and strength still 'runs away' after he finds out who it was.

In closing, this is, dare I say, better than the original series. It improves on each key sequence and story element in such a major way it is quite hard to look back, although at the same time it is also hard to advance. Each character is given more hope, more depth; Rei blocking Asuka's slap in the infamous long lift scene was a very shocking but cathartic moment, and there are many like this. The cruel world, the nature of the beast is the final judgment however, and every element of the show recedes to welcome the inevitable apocalypse, only it does it in such a masterful way that it is truly hard to fault Evangelion 2.0, both in terms of its method and its madness.

Evangelion: 2.0 You Can (Not) Advance