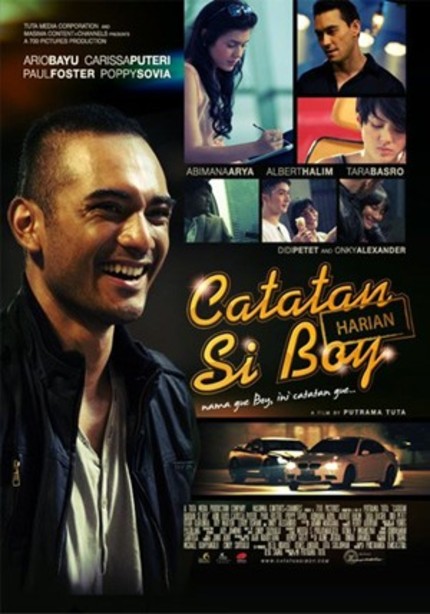 People often ask how ScreenAnarchy finds international movies produced in countries where none of us live and none of us speak the language. There are a few answers to that question but one of the simplest is to simply find people with good taste in those territories and pay attention when they get excited about something. And what people are excited about in Indonesia right now is Putrama Tuta's Catatan Harian Si Boy.

Due for theatrical release July 1, the first advance screenings of Tuta's film have just taken place and for the past twenty four hours it seems to be all that film folk in Jakarta have been talking about. From festival programmers to local media to fellow filmmakers - Macabre directors The Mo Brothers joke that they've been quoting the film to each other non stop since seeing it - Twitter is buzzing about this one.

And it's really not hard to see why. Tuta is taking action elements that have proven popular around the globe - the Fast And The Furious franchise has had an obvious influence - and wedding those elements to a script that actually cares about its characters. Cares rather a lot, apparently. He working with a very strong cast as well, and when you can build your action out from characters the audience cares about rather than just tacking a bit of exposition in here and there to link up bits of flash and dazzle then you have a shot at something exceptional.

Do you feel this content is inappropriate or infringes upon your rights? Click here to report it, or see our DMCA policy.
Nasri CheppyDidi PetetOnky AlexanderAyu AzhariMeriam Bellina