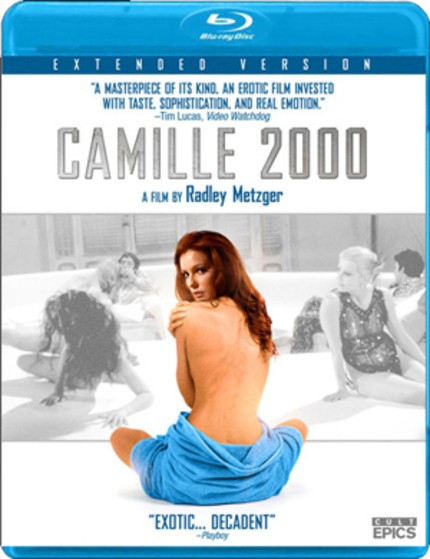 Of Camille 2000, Roger Ebert said in his one star review,

It is said that Orson Welles saw John Ford's "Stagecoach" 200 times before directing "Citizen Kane." According to a press release here on my desk, Radley Metzger has seen John Huston's "The Treasure of the Sierra Madre" 103 times. That was not enough.

And his was one of the kinder reviews.  Apparently, upon its release in 1969, the film felt like pointless obscenity.  Which makes Ebert's comments seem a bit strange, since around that time he was busy writing the script for Russ Meyer's Beyond the Valley of the Dolls.  Now, the latter film is one of my all-time favorites, but it is a favorite precisely because it eschews proper narrative logic.  The film goes off in a million different directions and, though it was also derided for its sexual content, it was wildly successful, becoming Fox's top grosser of 1970.

I guess that to Ebert, and many contemporary critics, Camille 2000 seemed to have its head up its own ass.  A film that was more about style than substance, but desperately trying to say something in the midst of acres of spectacular art direction, but with much soul.  Honestly, I can see where that criticism comes from.  Daniele Gaubert and Nino Castelnuova both give fairly wooden performances, and since the film's success as an emotionally gripping narrative rests on their chemistry, it is a bit of a stretch.  However, what really has me impressed about Camille 2000 is precisely the thing that seemed to bother Ebert.  The style is magnificent.

Enrico Sabbatini deserves every bit of every accolade for the art direction of this film as Radley Metzger does for the direction.  Metzger's films are perpetually set in worlds apart from those of the average person.  Where The Lickerish Quartet is set among strangely independently wealthy hedonists in an Italian castle and Little Mother was set among the Argentine aristocracy, Camille 2000 also finds its setting among the super rich.  The fulcrum on which the plot balances is actually the source of this wealth and the two protagonists battle to first maintain their opulent lifestyle, and ultimately run away from it.  The most valuable asset that the characters' wealth provides, however, is not pathos, but the opportunity for Sabbatini to go nuts.  There are entire rooms filled with only clear inflatable furniture and mirrors.  Every wall and every surface is covered in meticulously chosen fabric, wallpaper, textile, or design. Each outfit is a work of architectural perfection. This film is absolutely beautiful to look at, even when the beautiful, but apathetic looking, cast aren't wandering around the sets in the buff.

This film doesn't attempt to do much in the way of taboo bashing, at least not in the same way as other Metzger films do.  The only real sense we get that this is the swinging sixties is in the fact that both of the main characters are unapologetic about their past promiscuity.  However, even that isn't so daring as the basis for the plot is about them committing, or not committing, to one another exclusively.  What it does do is to provide a context for the sensual onscreen action and some magnificent settings, and for me, that's enough.

Camille 2000 is Cult Epics' third Metzger Blu-ray, and they are three for three.  The image is not perfect, but it is pretty astonishing.  There are small white flecks on screen for much of the run time, however, this is somewhat intentional.  In one of the extras, a comparison between the previous DVD version and the newly restored edition is shown, and the preface explains that very little digital manipulation was done.  There is very mild noise reduction, but no grain reduction; some repair of marks and scratches (which are very evident in the comparisons), but no removal of specks.  The intent was to give the Blu-ray the look of a very good 35mm projection, and I think it succeeds.  The restoration footage is amazing.  Cult Epics definitely has something to be proud of with this Blu-ray.  The audio is also good.  The film is presented in its English dub with no subtitles.  I wish there were subtitles because I like to read them while listening to the commentary, but there aren't. In any event, the dialogue is crisp and clear and the sound in perfectly fine.

Cult Epics have done very well in the extras department for all of their Metzger Blu-rays so far, and Camille 2000 is no exception.  They seem to have been given extensive access to Metzger's personal stash of archival material.  There is a thirty minute behind the scenes segment of silent hand held set footage, narrated by Metzger.  This is pretty fascinating, and well worth watching.  There is also the above-mentioned restoration footage which is equally eye opening. Another amusing extra is some hand held set footage of a three minute strip tease from a party scene early in the film.  The footage is pretty raw, but the dancer in the footage is pretty unhinged, fun stuff! The last significant video extra is a "cool" version of the Cube love scene, which essentially consists of the "hot" version, just framed a little higher to avoid nipples and bare asses. Finally, there is a commentary with Radley Metzger and Michael Bowen.  This is great, Bowen knows his stuff, and Metzger is very open with his praise and anecdotes about the film.  Metger is effusive about the contributions of his collaborators, including Enrico Sabbatini, and how important they were to getting the film just right.  There is a little bit more dead air than we expect from modern commentaries, but not too much.

Cult Epics have done a fantastic job presenting this never before seen version of Camille 2000 on Blu-ray.  If you are a fan of sixties erotica, or even just curious, you should definitely check out this disc.