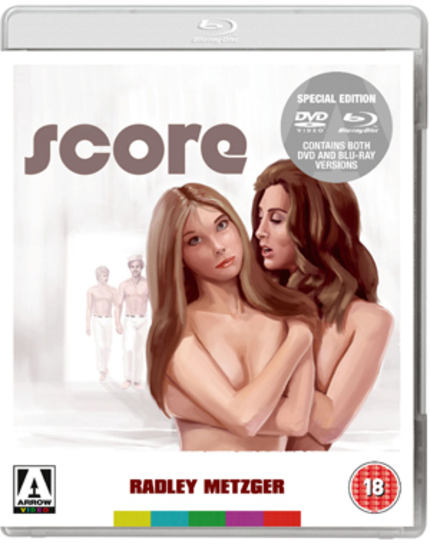 Score
Metzger's controversial swinger comedy appears on UK Blu-ray in it's original theatrical format, which is kind of a shame as the US disc from Cult Epics has a longer more explicit version, however, I don't know how much the film actually suffers between the different versions. This film is enjoyable on many levels, and Metzger's ability to deflate the male ego and make this film, which includes lots of guy on guy action, more about the art of seduction rather than the mechanics of sex is one of his great skills. Here's the synopsis from Arrow Video:

Riding an early 70s wave of ever more liberal big screen morals, Score takes us to the imaginary city of Leisure, where an experienced couple are playing dangerous games of seduction on the swinging scene. They're taking bets on who can screw who as they play fast and very loose with a newly married couple - Betsy and Eddie - two cute kids who are about to get their world turned upside down...

Metzger's decision to take this potentially incendiary story and set it in a fairy tale helps to distance the actions on scree from reality, thereby defusing a bit of the possible backlash that could come from all of the homosexual behavior on screen. But, as he states clearly in the commentary, the film isnt' about who's fucking who, it's about seduction and the game fo seduction, and that appeals to everyone. Male/female, gay/straight, everybody wants to seduce and be seduced, and even those with no interest in wife swapping can enjoy watching this pair of sexual predators engaging their prey in the most amusing of games.

As I mentioned above, the Arrow Video disc features a shorter cut of the film than the US Cult Epics disc, and I know this is a deal breaker for some, so be warned. The transfer itself, however, it identical and both discs feature the same healthy collection of extras on the disc, most of which include generous participation from Metzger, who loves to talk about his work. The one thing that distinguishes this all region disc from the US disc is the addition of a great essay from Cinema Sewer's Robin Bougie, who has also done illustration for Arrow Video in the past. Apart from that, the editions are pretty much identical. 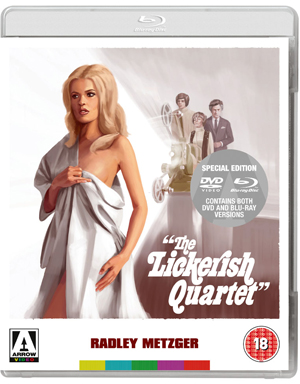 The Lickerish Quartet
Set in an opulent European castle, The Lickerish Quartet a prime example of why Metzger decided to shoot on The Continent in the first place. Extravagant, relatively inexpensive locations, more relaxed morality in general, and a sense of otherworldliness that he could bank on back home in the US. This story of shared sexuality between a family and an outsider they invited into their little games is a wonderful little story punctuated by some stellar love scenes and an interesting rumination on memory and its fallibility. Here's a piece of my review from the Cult Epics version:

One constant theme running through the film is how untrustworthy our own memory can be, and how perception can be molded by just the slightest of outward changes.  The girl from the carnival, though immediately recognized by the family, denies that she is the figure from the stag reel.  For a moment, they are convinced, some more than others.  This ultimately becomes a point of contention between the husband and wife, though their conflict goes far deeper, and they appear to be acting out at symptoms of their unusual sexual relationship.

Again, Arrow Video replicates Cult Epics transfer and extras (commentary, behind the scenes footage, pre- and post-dubbing examples, etc.), but adds an uncompressed LPCM audio track that helps the film's sonic experience. In this case there are no discrepancies between the cuts on the two different discs, so I'd definitely recommend Arrow Video's presentation for the improved cover art and Robin Bougie's essay. Apart from that, if you already own the Cult Epics disc, you can probably skip this version. 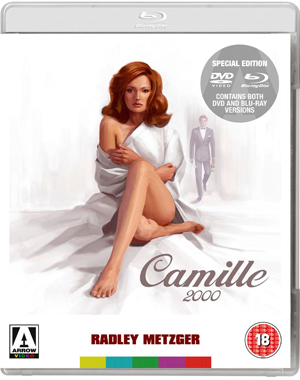 Camille 2000
Metzger's adaptation of The Lady of the Camellias is yet another look at late sixties sexual freedom that deserves to be seen and appreciated far more than it is. Camille 2000 is perhaps Metzger's most beautifully art directed film, which is saying something, much to the credit of Enrico Sabbatini, who makes the film his own through his amazing set decoration. Again, I already reviewed the film when it was released by Cult Epics a couple of years ago, and hate to repeat myself, so here is a piece of that review:

Enrico Sabbatini deserves every bit of every accolade for the art direction of this film as Radley Metzger does for the direction.  Metzger's films are perpetually set in worlds apart from those of the average person.  Where The Lickerish Quartet is set among strangely independently wealthy hedonists in an Italian castle and Little Mother was set among the Argentine aristocracy, Camille 2000 also finds its setting among the super rich.  The fulcrum on which the plot balances is actually the source of this wealth and the two protagonists battle to first maintain their opulent lifestyle, and ultimately run away from it.  The most valuable asset that the characters' wealth provides, however, is not pathos, but the opportunity for Sabbatini to go nuts.  There are entire rooms filled with only clear inflatable furniture and mirrors.  Every wall and every surface is covered in meticulously chosen fabric, wallpaper, textile, or design. Each outfit is a work of architectural perfection. This film is absolutely beautiful to look at, even when the beautiful, but apathetic looking, cast aren't wandering around the sets in the buff.

This film doesn't attempt to do much in the way of taboo bashing, at least not in the same way as other Metzger films do.  The only real sense we get that this is the swinging sixties is in the fact that both of the main characters are unapologetic about their past promiscuity.  However, even that isn't so daring as the basis for the plot is about them committing, or not committing, to one another exclusively.  What it does do is to provide a context for the sensual onscreen action and some magnificent settings, and for me, that's enough.

In terms of the differences between this and the Cult Epics version is the same as with The Lickerish Quartet. Identical transfers, new LPCM audio track, and identical extras. RObin Bougie's essay is a welcome addition, but that's the only edition. I'm ecstatic that these films are getting the red carpet treatment in the UK, I think that anyone who loves films needs to give these a chance. Far from being cheap porn, Metzger's work is the apex of serious erotica on film, and marks the last time one real cinematic artist made such a commitment to the form. Definitely pick these up!

More about The Lickerish Quartet