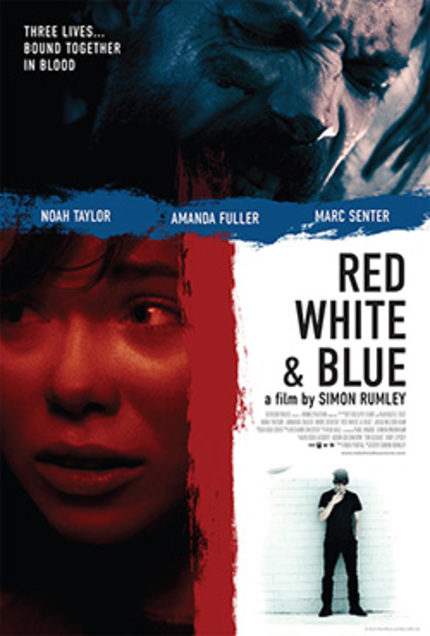 It could be hard to sell people on Simon Rumley's Red, White & Blue. It is frequently a brilliant film, make no mistake (and yes, it more than justifies the hype we've given it), yet - without resorting to spoiling its nuances or key plot points - going by the first fifteen minutes or so a good many prospective viewers are more than likely to wonder what exactly is worth getting so excited over.

We start out at the detached pace of a road movie, following Erica (TV actress Amanda Fuller), a young woman wandering across America. Seemingly rootless and generally unattached, she spends her nights in bars and clubs, typically catching some stranger's eye, ending up in bed with him before swiftly moving on to her next brief encounter.

The camera doesn't judge her - Erica's clearly emotionally withdrawn, refusing to get personally involved with any of her partners, but while she might taunt one with a barbed come-on she's obviously touched by another's invitation to spend some time together, anxious to get out of there before she betrays how much the offer affects her.

It's a blunt, clinical character analysis - she sleeps with three guys, she moves on, she sleeps with another guy, she moves on ad infinitum - and it feels not a little intimidating. Yet the scripting, the performances and DP Milton Kam's crisp, economical visual flair (Robert Hall's editing in the first act is also phenomenal) mean the obvious question is somehow always enough to keep the viewer watching. Why is she hurting herself, to say nothing of so many other people?

Erica's journey lands her in Austin, Texas, where she ends up working in a hardware store alongside Nate (Noah Taylor, best known for his starring roles at a young age in The Year My Voice Broke and Flirting). Initially Nate seems too obvious to be believed; fascinated with Erica despite her abrupt dismissals, his first conversation with her reveals his history of torturing and killing small animals, and his apparently genuine concern over her continuing casual sexual activity doesn't preclude a brutally violent response towards anyone he thinks is taking advantage of her.

Last comes Frankie (Marc Senter), a struggling guitarist in the neighbourhood, young enough channelling his anger and resentment at the world into his music is enough to keep him going, yet old and just about wise enough to realise if his big break doesn't turn up soon enough, it may never. Like Erica, and even Nate, on reflection Frankie doesn't appear to deserve his problems - a mother struggling with cancer, and a father who callously ran out on his wife when she most needed him.

But then Rumley abruptly takes things far, far darker, and what happens to threaten everything good Frankie has managed to achieve turns out to involve Erica, and by extension Nate as well. For the first two thirds of the running time Red, White & Blue makes it clear all three leads are not entirely without hope, regardless of whatever bad things they've done or suffered through. Then everything suddenly goes horribly wrong.

The film does hinge on a twist, one attentive viewers may well guess (an early press release even accidentally gave it away!), but this is far from a Shyamalan Big Reveal. There are multiple layers in that even once the last act begins the script still hasn't explicitly answered every single question, and even on repeat viewings it is difficult to overstate how well the twist informs why everyone behaves as they do, not to mention how much greater nearly every aspect of the film appears in hindsight.

Fuller and Taylor are both superb - Fuller in particular deserves to move on to still bigger and better things. Although both leads have some fairly weighty dramatic heavy lifting to do, Amanda's role as Erica means she has to internalise virtually everything for the majority of her time onscreen. The character could easily have slipped into parody given the way the story develops, the amount of sexual content that introduces her and just how much of her connection to the audience rests on one quick speech, but Fuller's portrayal brings home with shattering force just why the film began the way it did and how much of a tragedy every successive twist really is.

Frankie is clearly the weakest of the three leads, with Marc Senter never really on the same level as his co-stars, though he still manages to win some measure of sympathy even after his moment of madness. Noah Taylor struggles to shake off initial impressions of Nate - Rumley's script never seems entirely sure how much of a stereotype the character ought to be - but he proves shockingly convincing as a man who exudes the potential for psychopathic savagery. Again, like Fuller, Noah carries the sickeningly violent conclusion with a performance that continually reminds the viewer this is a man with further secrets as yet unrevealed, and the final coda is heartbreaking in its simplicity.

Engrossing, moving and terrifying by turns, Simon Rumley's fifth feature is a fantastically atmospheric slice of Americana, a beautifully scripted character drama, a horrifying revenge thriller and ultimately even a profoundly affecting love story. While a few steps short of perfection - Rumley and his crew do visibly struggle to balance multiple genre influences and character arcs as the narrative progresses - this is largely the work of a director on stunning form and (for the right audience) comes hugely recommended. Simon Rumley may never become a household name with material so wilfully uncompromising, but he deserves far more attention. However hard it is to sit through Red, White & Blue is already without question one of the highlights of the year.