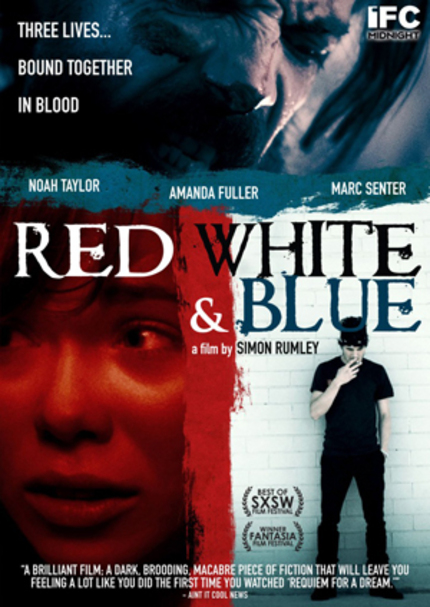 Erica (Amanda Fuller) drifts through the bars of Austin going from one sexual partner to another, never connecting emotionally. That changes when she meets Nate (Noah Taylor, Shine, Almost Famous), a discharged Iraqi vet who is more interested in being Erica's friend than her latest conquest. A strong bond of friendship develops between them, but Erica's background intrudes in the form of Franki (Marc Senter), a wannabe rock star whose sudden presence sets the stage for a shocking conclusion. With RED, WHITE & BLUE director Simon Rumley (The Living and the Dead) crafts a formidable "trip through the darkest corners of the American psyche" (Anton Bitel, Little White Lies).

Wow.  It feels as though I'm the last among the ScreenAnarchy crew to see Simon Rumley's Red, White, & Blue.  All I've read for the last 8 months or so is effusive praise for the film.  Team ScreenAnarchy has really taken this film under its collective wing and tried to encourage people to see it, but a lot of you probably haven't had the chance until now.  Do not wait!  Pre-order now!  May 17th is only a few days away, do yourself a favor and camp out at your favorite DVD store.

Our own Peter Martin wrote this upon seeing the film at SXSW last year:

Gut-twisting and soul-troubling, Simon Rumley's latest film fires a stun gun into the heart of horror. For every convention that is honored, another is upended and a third is smashed to pieces. Red White & Blue amply demonstrates Rumley's continuing evolution as a filmmaker.

"Red, White & Blue" is a tight little thriller which looks great, is interestingly scripted and structured, and most of all features stellar acting. The real revelations here are Amanda Fuller as a major talent to keep in sight, and Noah Taylor who through his role as Nate somersaults straight into my shortlist of favorite actors.

I must say that I agree with them both.  This is the kind of film that festivals were made for, bleak, uncompromising, and without any clear, single protagonist or antagonist.  The film plays three very different characters against one another who should never have been a part of each other's worlds.  However, as often happens in life, they become inextricably bound to one another, and it doesn't end well for all of them.

I'd read the above reviews before seeing the film, but I must say that I still feel as though I went in completely blind.  Short of explaining the entire plot, scene for scene, there isn't really much that can prepare you for what unfolds onscreen.  The film takes some very interesting turns, and, at least for me, made some very surprising decisions.  Once those plot twists were revealed, it wasn't much of a chore to imagine what might come next, but the way in which the events played out was far more brutal than what I'd imagined.  The shock was only made greater by the fact that the characters were all recognizable as real people and not caricatures or stock characters.  The idea that these real people in this film could commit such acts somehow lent credence to the idea that real people in the real world could do the same.  In any other film, the digression into savagery would probably have taken the viewer out of the experience and reminded them that it wasn't real, but Rumley's characters are so well written, that it becomes even more gruesome and believable.

Unfortunately, IFCFilms have decided to release Red, White, & Blue on DVD only.  There isn't a bunch of visual trickery that would make this a reference disc on Blu-ray, but there is enough careful attention to lighting and set design that the film certainly would have benefited from high definition.  As it stands, the DVD is very solid.  The lighting looks about as good as it can, most of the film was shot under existing light, and it shows.  There is substantial detail, and the colors look pretty accurate, if affected by the amount of ambient light present, which I'm sure was the intention.  The sound is equally adequate.  This isn't an action film, the dialogue is clean and clear, and there is occasional stuff going on in the surrounds, but not overwhelmingly.  The music and sound play an important part in creating the mood, and that is well established with IFCFilms' DVD.

The extras are a pretty standard lot, only made exceptional by the film that they accompany.  There is a making-of featurette that runs about twenty minutes.  It features interviews with all of the principals of the film, including Rumley and his producer Bob Portal, as well as all of the lead actors.  There is also on set footage of the making of Red, White, & Blue, and a little discussion of some of the hardships the cast and crew faced (don't whine to me about how hot Texas is, boys, I LIVE IT!).  The other major extra is a commentary from Rumley and Portal that is high spirited, informative, and jovial.  They do a good job of trying to get the listener behind the scenes rather than simply explain the action on screen as too many commentators do.  Rounding out the extras are a couple of extended scenes, a blooper reel made somewhat surreal by the dark nature of the film, and a stack of trailers and teasers.  Most of the trailers are identical, but the blooper reel is pretty funny.

Red, White, & Blue was a kick to the 'nads, that's for damned sure.  However, it is a brilliant and gripping one, and I'd gladly take that hit again.  Obviously, this one comes highly recommended.

Red, White, & Blue comes out on DVD from IFCFilms on Tuesday, May 17th.