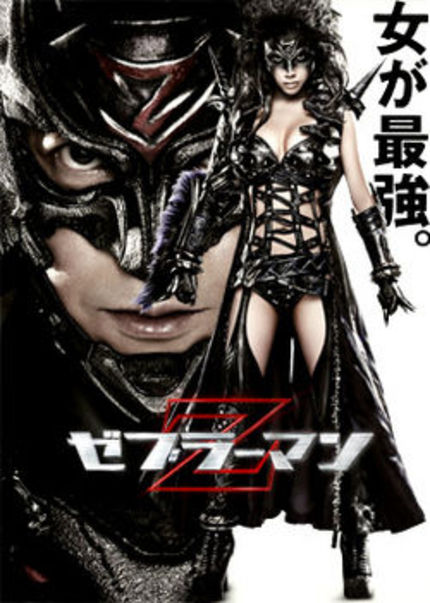 Takashi Miike is back for another round of black and white Zebra fun. The first Zebraman was released in 2004 and marked Miike's first venture into the superhero genre, six years later he returns to build upon that legacy, more experienced and better armed. The result is enjoyable indeed, but not really a direct continuation of the Zebraman universe. Beware, this is a Miike sequel.

Zebraman 2 isn't Miike's first sequel and it will definitely not be his last. It's always somewhat of a gamble how these sequels will turn out though. Sometimes they're simple and straight (Crows Zero), at other times there is hardly a connection between the films (think the Dead or Alive trilogy). Others are just 2-part films that should be watched back to back. The man is just unpredictable like that.

Zebraman 2 falls somewhere in between. Story-wise it's a pretty straight-forward sequel, firmly set in the same realm as the first film and expanding on the original story. But the feel of Zebraman 2 is completely different, making it more of a sequel to Miike's own Yokai Daisenso. The light, poppy, big budget atmosphere broken down with a serious dash of Miike weirdness seems directly taken from that film. The result is very pleasing indeed, but if you're expecting to get a simple expansion of the atmosphere found in the first film, you're in for a little surprise.

The story is quite nonsensical but a fun diversion nonetheless. Zebraman is captured and put in a giant centrifuge, meanwhile evil forces are taking over Tokyo and turning it into Zebra City, featuring their own Zebra laws and everything. Basically, there's a daily 5-minute window where all crime is justified and you cannot be prosecuted for killing, raping and doing other nasty things. Zebra City thrives, but Zebraman is slowly regaining memory of his former duties. If that sounds a little weird and all, don't worry, it's supposed to.

Miike is a rare director that can handle both big and small budgets. Sure not all CG is top notch, but it always serves some purpose beyond being just CG for the heck of it. The centrifuge scene might not be cutting edge, it's still a lovely little addition to the Zebraman universe. The cinematography on the other hand is beautiful, even occasionally stunning, especially the scenes inside the car are a lovely continuation of the visual zebra theme found throughout the whole film.

The soundtrack is J-Poppy good(?)ness with a serious attitude. Rather than simply throw in some theme songs though, the music is integrated quite well into the actual storyline (turning the female protagonist into a singer and performer was a rather smart move). A pretty decent blend of pop and dance mixed with a heavy dose of girl power. It's not really something that would work outside the film (at least, not for me), but again it brings something extra to the film's universe.

Sho Aikawa has returned from the first film to fill the uncomfortable Zebraman suit, featuring bleached hair for the occasion (he pulled a Kitano there). He's a great (somewhat underappreciated) actor with a rare talent to bring humor to a straight-faced performance. It's a unique combination that makes him quite perfect for his role. Naka (didn't recognize her at all) does a pretty swell job of opposing Zebraman, bringing a lot of attitude and power to the table. The both of them hold up extremely well amongst all the silliness.

Most of Miike's films suffer from a slight dip around the halfway point. It may be not as apparent here, but it's still hard to deny that most fun is to be had near the start and end of this film. The final 30 minutes is pure Miike genius though, featuring over-the-top action, creative weirdness, huge aliens and some genuinely laugh out loud comedy. Stop aids indeed. It's everything what I'd expect from a Miike film, which is extremely rare for a big budget flick like this. I just can't imagine any other director working with these kind of budgets that gets so much freedom.

The first Zebraman was mostly about Aikawa's boring character becoming a superhero. This sequel leaves all that behind and evolves together with Aikawa. There is some background morale (maybe even some interesting political material) but all of that is quickly forgotten when the explosions are making their entrance and when both Zebras are battling each other and a city-wide alien to save the world of disaster. The result? One of the most memorable closing shots ever.

Zebraman 2 is not all that easy to recommend. Depending on what you expect or demand from a sequel, it's either a missed opportunity or a definite improvement over the first film. It's doesn't follow the same path as the first Zebraman so people expecting to return to the same atmosphere will be a little disappointed, but if you're up for a Yokai Densetsu sequel set in Zebraland you're in for heaps of fun. As for me, I believe this is definitely an improvement. One thing is certain though, ain't nobody doing blockbuster like Miike does.
Tweet Post Submit