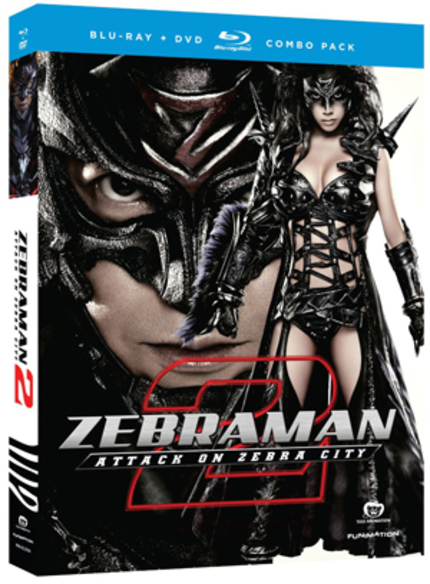 Just to prove that he's versatile, in case you hadn't been paying attention, Takashi Miike turns in a sequel to his beloved Zebraman that outstrips the craziness of the first film by a country mile. Zebraman 2: Attack on Zebra City is a blast!  It's a film that blows the doors off and proves that creativity is not dead. I never cease to be amazed with what Takashi Miike can do as his cache and budgets rise.  FUNimation's Blu-ray/DVD combo of Zebraman is a treat.  The disc features some excellent in-depth special features along with great image and sound quality.  If you love Takashi Miike, you want this set.

Schoolteacher-turned-superhero Zebraman faces his greatest challenge yet when the evil pop-music-loving Zebra Queen and her sexy Zebra police strip the hero of his superpowers and then turn Tokyo into Zebra City, an anarchy-riddled killing zone.

The first Zebraman film was a story about a man finding his place in the world.  Sure, it was made with a backdrop of crazy tokusatsu faux TV history, but the story itself was really pretty small. It was the story of a man who didn't fit in, and whose family didn't accept him, a man who needed a refuge who found one in his Zebraman fantasies.  Now, of course the film ends with a giant green jello alien monster destroying a grade school, but up until that point the film was fairly contained.  Zebraman 2 does not that that route at all.

For all of the subtlety that Zebraman cherished, Attack on Zebra City cranks up the volume and leads the audience into a futuristic dystopian Japan. Zebraman, AKA Shinichi Ishikawa played by the legendary Sho Aikawa, has lost his memory, but ends up in Zebra City in the future.  Zebra City is led by a sinister governor and his mysteriously evil/really cute daughter, The Zebra Queen, played by Riisa Naka. Zebra Queen also happens to be the biggest pop star in Zebra City, and we are treated to a couple of really catchy j-pop numbers to remind us of that fact.

From there on out, there are plot twists galore, and to keep from spoiling the film, I'll refrain from describing too much more plot.  Suffice to say that the film doesn't ever really slow down, and doesn't have much in common with the first film apart from Sho Aikawa's Zebraman character.  Along the arc of Miike films from normal to crazy, Zebraman 2: Attack on Zebra City hovers somewhere in the vicinity of Yatterman/The Great Yokai War/Like a Dragon (Yakuza), and somewhat far from the more subdued Zebraman/Dead or Alive 2 styled films.

If you like the loud, shiny, and crazy Takashi Miike, this is a good film to jump on.  I know some of my fellow viewers at the Asian Film Festival of Dallas found it a bit long, but I don't think there was much wasted footage in the film.  With something as crazy as this, you usually have to account for a little bit more exposition to explain the internal rules of the film. I loved it, and the musical numbers are great.  I can't wait to watch it a fourth time!

One thing that struck be before I even too the plastic off of the case was that the tech specs of Z2 stated that the film is in 1080i, rather than 1080p.  The case says this is it's native format, but I was still skeptical. Thankfully, once the film started playing, I didn't notice any problems at all, the film was recorded on HDCAM, so I think it all worked out.  There is ample fine detail, and thought the film's palette is mostly a very controlled black and white scheme, when color does decide to peek in, there is a lot to look at, it's all great!  The audio is also great.  As is FUNimation's habit, they feature a Dolby TrueHD 5.1 track in Japanese as well as a Dolby TrueHD 2.0 stereo Japanese track, but no English Dub! Both tracks are great, and if you go straight to the songs, it is a great way to scare your neighbors dog when played at the appropriate volume.

The extras on this disc go above and beyond the typical FUNimation release.  To start with there is a ninety minute behind the scenes/making of documentary that covers all aspects of the shoot, from the early costume fittings through CG enhancements. Really great stuff from FUNi.  There are also a number of interviews with Miike and his various cast members, as well as a behind the scenes look at the shooting of one of the musical numbers.  Overall this is a much more comprehensive package than I was expecting.  Kudos to FUNimation!