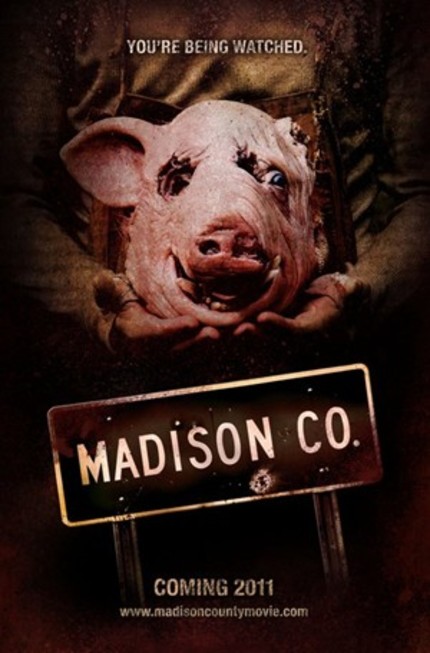 The young crew behind Madison County make no bones about their goals for the film. They want to create the next Jason, the next Leatherface. Whether their creation will have the staying power to deserve being mentioned in the same breath as those earlier icons one thing is abundantly clear from the freshly released trailer: They know their history.

Produced on a shoestring budget by a crew with an average age of just 25, director Eric England, producer Daniel Dunn and star / producer Ace Marrero worked together previously on England's film school thesis project and that experience has clearly shown through. Here's the official synopsis:

Madison County is about a group of college students that travel to a remote, mountain town called Madison County to interview the author of a tell-all book on the accounts of the grisly murders that happened in the town over two decades ago. Upon their arrival, the author is no where to be found and the townspeople state that they've "not seen him in years." They also deny that Damien Ewell, the notorious murderer, ever existed and that the murders never happened. As the kids start to dig around to get their own answers, they come to find that the stories, and Damien, maybe more real than the townspeople are letting on.

Check the full trailer below and let us know what you think. Has Damien got the goods?
Tweet Post Submit

Do you feel this content is inappropriate or infringes upon your rights? Click here to report it, or see our DMCA policy.
Eric EnglandColley BaileyMatt MercerAce MarreroJoanna SotomuraHorrorMysteryThriller