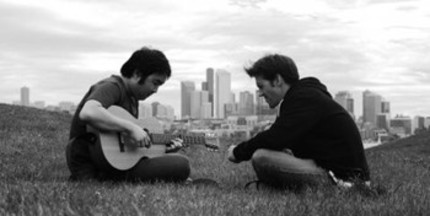 Over the past few years we here at ScreenAnarchy have had the chance to watch the development of director Dave Boyle. At this point we've covered every one of his films and it's been fascinating to watch Boyle gain confidence in his own voice from project to project.

Boyle's films always contain some element of culture clash, specifically the point where Asian culture buts up against mainstream America. What's remarkable about Boyle is that it never feels like a gimmick or as though he is an 'issue filmmaker' banging the drum to make a point. Instead he just turns out charming, funny films that happen to have other layers of meaning to them.

His White On Rice was something of a breakthrough, having a successful arthouse theatrical run in the US, and now Boyle is headed to SXSW with his latest effort. A subdued indie comedy titled Surrogate Valentine it's the story of an actor traveling with a failing musician as research for an upcoming film. Or at least that's the hook, the meat of it isn't in the plot but in the interactions of all involved. Take a look at the trailer below.
Tweet Post Submit