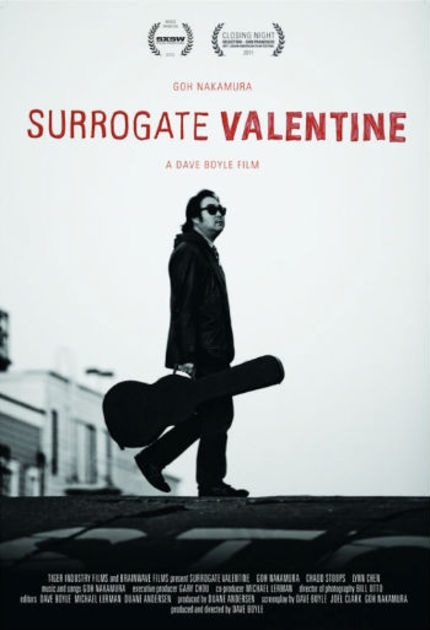 A musician (Goh Nakamura) is hired to give guitar lessons to an actor (Chadd Stoops) in a funny, insightful new movie by Dave Boyle, which screens in San Francisco this weekend. From a slender premise, Boyle (Big Dreams Little Tokyo, White on Rice) launches a character study sculpted in black and white, boiling the personalities of the musician and the actor down to their essentials.

The musician, named Goh, is asked by a filmmaker friend to give TV actor Danny Turner a one-week crash course in guitar. Danny will be playing a "burned-out, sad sack musician," as he describes the role to a fan. Danny has a lot of fans; he's been playing a doctor on TV for long enough that people recognize him on the street. (He even has his own catchphrase!) That's probably a good thing, since it provides a context for his hyper-kinetic manner.

Danny comes across as an annoying chatterbox to Goh, who wants nothing more than to write songs and play his music. He's quiet, contemplative, polite to a fault, and socially awkward to an uncomfortable degree. When it's just him and his guitar alone on stage, though, he comes fully alive, giving his heart to the music, no matter if his audience is just a handful of people in a coffeehouse.

Goh is getting paid for allowing Danny to tag along on tour, and he needs the money, so that, along with his introverted tendencies, helps him to keep his irritation with Danny in check. Danny comes across as a Junior League method actor, still coasting on his greatest triumph as an actor at the age of 3 in a TV commercial. He remembers it as the widest audience that ever saw him "act," and it seems that's how he adjudges his own success in life. It's no wonder that Danny is more anxious than usual as the two embark on tour: his TV character, Dr. McFarland, we later learn, is in a coma on the show, and that is not a good sign.

But Danny isn't all bad. He proves to be helpful to Goh, in more ways than one.

Goh, it turns out, is nursing a unrequited crush on the very lovely Rachel (Lynn Chen), a friend from his high school days, a yearning that is reawakened after the two renew their friendship at one of his shows. As Goh travels from his home base in San Francisco to one of his many gigs in Seattle to more work in Los Angeles, Rachel is on his mind, a recurring theme that ripples throughout the film, like the echo of Goh's chiming guitar

Nakamura, who has never acted before, plays a version of himself, and his awkwardness translates into a kind of low-key grace, his energy burning brighter in one-on-one situations with people he likes and dissolving toward zero when he's surrounded by outgoing folks who barely acknowledge his presence. It feels entirely natural and is never boring; he's the kind of person you might gravitate toward at a party because you never know when he might crack an unexpected joke or break out a smile.

The script by Boyle and Nakamura appears to be loosely-connected, and it plays with a very light touch, but it is, in fact, a tightly-constructed piece, with every development shedding light on one, or both, of the main characters.

Surrogate Valentine is a total pleasure, surging quietly with authenticity and emotion, and I'm only sorry that I've missed it at previous festival appearances.

The film screens tomorrow, July 16, and Sunday, July 17, in San Francisco at the Roxie Theater. Boyle will be present for Q&A sessions after the evening screenings, and Nakamura will play live music before both evening shows on Sunday. It will play at the Woods Hole Film Festival in Massachusetts on August 1.

If you can't make those shows, the DVD and soundtrack are available to purchase via the official site (see links below).