It's CAPTAIN AMERICA In Action. 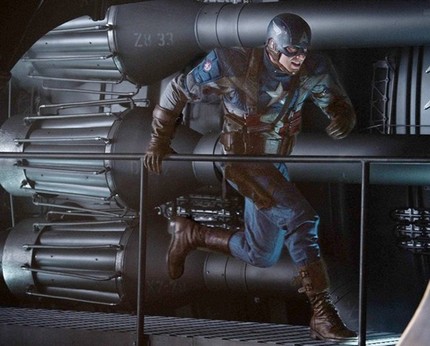 Marvel's rolling out a one-two punch of their most difficult characters to put on screen this summer with Thor and Captain America. Thor's a tough one to have audiences take seriously because he's a god with a hammer and a silly helmet, that's obvious enough. But Cap? Captain America is probably the most over the top manipulation of "Go, America!" rah rah that Marvel has ever published and that sort of tone is a tough sell. Plus he has an incredibly silly suit with both silly helmet and even more silly shield.

So fans have been waiting to see images and footage of the Cap in action to make a judgment call. the first image was just him standing around and partially obscured, so we ignored it here at ScreenAnarchy, but here he is in a full body shot running at full speed. Thoughts? Does director Joe Johnston have a chance of pulling this off?
Tweet Post Submit