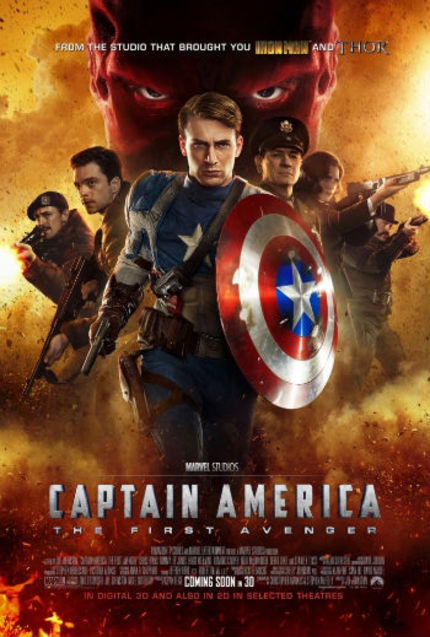 The Marvel comic book company has no shortage of colorful characters to choose from when constructing a new film, but as far as the most popular leading men are concerned, we may soon be hitting a drought. Obviously the company can keep doling out sequels, prequels, and remakes featuring Spider-Man, Hulk, Thor, Iron Man, Wolverine and the X-Men, but comic fans, loyal though they may be, often want something new. If this description sounds a little like you, then here's some great news: one of the last "big" Marvel heroes to get his own movie has arrived, and his vehicle, entitled Captain America: The First Avenger, is a fantastic treat: smart, clever, confident and, best of all, different.

Most recent origin stories in superhero cinema are pretty similar. Even Thor, who hailed from another dimension, is still dealing with guilt, immaturity, and daddy issues found in almost every Marvel adaptation. Perhaps it's simply due to the fact that Joe Johnston's Captain America movie is an early-'40s period piece, but there's some real and palpable freshness to be found in Captain America: The First Avenger. The freshness, combined with a strong ensemble, an intelligent script, and a compelling directorial vision from Mr. Johnston, combines to deliver one of the finest superhero adaptations of the year. (Let's just say it's among some fine company; Marvel's Thor and X-Men: First Class were also surprisingly cool movies.)

A slyly modest story, Captain America is about a brave yet scrawny Steve Rogers, a kid from Brooklyn who wants nothing more than to enlist in the Army and kill some Nazis in the name of freedom. Unfortunately, the Army covets muscles more than it does moxie, and so Rogers is left behind ... until he meets a brilliant German doctor who wants to give Steve the "super soldier" treatment, which leads to the creation of, you guessed it, Captain America. At first, Rogers is treated like a promotional gimmick -- in the film's best sequence, one that's sure to earn a Best Song Oscar nomination -- but after succeeding on a daring rescue mission, Rogers becomes the U.S. Army's number one secret weapon.

Steeped as it is in lovely 1940s Americana, the flick is certainly a tasty piece of apple pie. To the film's inestimable credit, though, the artless, old-school patriotism never hits the screen with the mindless "rah rah!" jingoism that plagues many, perhaps most, modern action films. Plus, you certainly don't have to be American to enjoy seeing a Brooklyn kid beat up on the Nazi party's most vile and occult-obsessed lunatics. (As the head baddie, Hugo Weaving is, big shock, a whole lot of fun.) Set to be released as The First Avenger in certain territories, the movie is patriotic inasmuch as it's simply about an American-born superhero. I have a very short fuse for the "pandering" style of cinematic patriotism, and so I'm pleased to note that Captain America is virtually bereft of the chest-thumping "We rule!" attitude that often runs rampant in America-centric spectacle.

This will come as no surprise to anyone who admires Joe Johnston's The Rocketeer, but the setting is virtually a co-star in Captain America. The period design is both "comic book stylized" and nostalgically realistic. And, frankly, it's just really cool to see a big-time superhero flick that takes place in the early '40s. Fine as both a noble runt and a gentlemanly superhero, Chris Evans checks his usual wise-ass demeanor at the door and delivers a character worth caring about. Smaller assets pop up at every turn: Stanley Tucci, Tommy Lee Jones, Neal McDonough, Dominic Cooper, Sebastian Stan and the lovely Hayley Atwell as Cap's eclectic batch of allies; Toby Jones as a suitably craven henchman; a rousing score by Alan Silvestri; some lovely work from DP Shelly Johnson and production designer Rick Heinrichs; and, best of all, a meaty but entirely logical editorial approach that encapsulates all of Rogers' early adventures in one tight and refined two-hour frame.

And, sincerely, a certain "propaganda montage" is something special. The action, the chuckles, the surprisingly interesting character development ... they're what make Captain America a very solid action flick. But it's that one special montage that elevates the film into something a little bit cooler than the typical Marvel fare. Basically, it sums up in four minutes why Mr. Johnston was the right director for this particular comic book project. And I suspect that the old-school Captain America fans will agree with me.

Captain America: The First Avenger opens wide today in the U.S., Canada, Italy, and Poland before rolling out across the world in the next few weeks. Check local listings for theaters and showtimes.