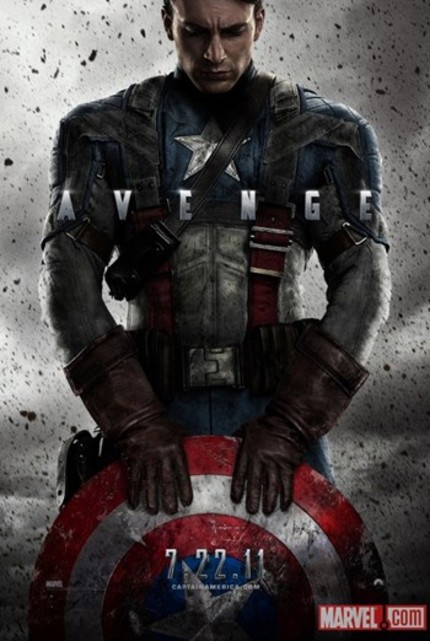 Yes, you should remain through the credits for Captain America: The First Avenger. Your patience will be rewarded with ... something good that fans of the Marvel universe will want to see. (Also, it's polite to the filmmakers.)

That's not the most notable way Marvel rewards its loyal fans, however.

By dictionary definition, loyalty is demonstrated by giving or showing firm and constant support or allegiance to a person or institution. By Hollywood's definition, loyalty extended to filmmakers and actors is inextricably bound up with financial success, and is, usually, extremely limited. When it comes to major studios displaying loyalty to the moviegoing public, loyalty is restricted to what ends up on the screen.

It would be fantastic if studios gave loyal repeat customers a discount for patronizing the second sequel of a movie they once kinda liked, for example, but we know that's never going to happen, not in an age in which most of the studios rushed to post-convert every movie possible into 3D in order to squeeze out as many millions as possible at the box office, no matter how crappy the results looked. (That's called killing the goose that laid the golden eggs, fellas.)

If you, as a moviegoer, have been faithfully patronizing all the previous installments of the Harry Potter series, all you can hope for is that the final edition will live up to expectations. Making a good movie is the primary objective, after all. The same applies to the Marvel movies.

As a long, related aside, the fact that I can refer to "Marvel movies" -- and you, the ScreenAnarchy reader, know which ones I'm talking about -- is testament to Marvel's marketing and branding skills. I'm not sure how much this has bled over into mainstream audiences; does your Aunt Clara know the difference between Thor and Green Lantern? But even if you haven't seen every Marvel flick in recent years, you've learned that if you sit through the credits, you'll get to see a teaser for a forthcoming movie. (Jackie Chan made the showing of outtakes a standard feature of the closing credits for his movies after he saw director Hal Needham do it for The Cannonball Run.)

Beyond that, however, Marvel has been working hard to make the properties they control fit into a shared universe, with next year's The Avengers as the centerpiece, and various sequels revolving around it. Because I was distinctly underwhelmed by both Iron Man 2, which seemed to spend too much time spinning its wheels in order to make sure it could fit into that universe, and Thor, which felt extremely clumsy without capturing the essence of its lead character's godly nature, the prospect sounded dubious.

Captain America turned me around to the possibilities. While the action sequences are cohesive without being dazzling, I thoroughly enjoyed the characters, atmosphere, and details. If you've been faithfully watching all the Marvel movies, you'll recognize certain characters and catch subtle (and blatant) cross-over references.

Yet, even without that prior knowledge, the film is a good-natured, stand-alone romp, an adventure with a wholesome, basically unblemished leading man (Chris Evans), a leading lady who can kick ass (Hayley Atwell), and an evil villain worthy of hissing (Hugo Weaving). It's fan service that doesn't feel like fan service, avoiding the trap of recycling characters, situations, and lines of dialogue that Scream 4 and Fast Five fell into. Instead, Captain America features what we might call complementary fan service, with individual moments complementing those in other Marvel movies, not slavishly repeating them.

Naturally, much of the credit for the film belongs to director Joe Johnston (pictured above) and his key creative collaborators. Johnston has a great feel for the period, as previously demonstrated in The Rocketeer, as well as the ability to emphasize character over action and still keep the film rolling along. But there's also something positive to say about Marvel Studios President Kevin Feige, who deserves credit for his determination to make all the pieces fit in the jigsaw puzzle of the Marvel movie universe as it presently exists.

Occasionally it's been a rough fit, with some poorly-constructed seams showing, but Captain America gets it right, heightening anticipation for The Avengers, while making a persuasive case that the last superhero movie of the summer was worth the wait.

Sometimes, loyalty is rewarded. Even in Hollywood.