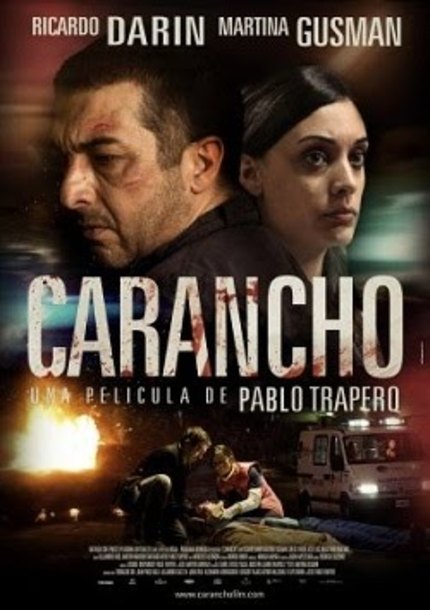 Programmed within my favorite sidebar at the Palm Springs International Film Festival (PSIFF)--i.e., Awards Buzz: Best Foreign Language Film (which this year is featuring 40 of the 65 official submissions to the 2011 Academy Awards®)--Pablo Trapero's Carancho (2010) chases the shrill sound of ambulance sirens. I first caught this film at the 2010 Toronto International Film Festival (TIFF) and feel now is a good time to revisit those notes.

As synopsized by PSIFF: "Rooted in the reality of the corruption and violence of Buenos Aires, this gritty modern-day noir features Ricardo Darín (The Secret In Their Eyes and The Son Of The Bride) as Hector Sosa who, like the titular vulture-like bird, swoops down on unfortunate victims of Argentina's shockingly commonplace road accidents. Having lost his law license, he is relegated to the role of ambulance chaser for his thuggish employers who profit from a flourishing industry of false claims and insurance scams, fleecing victims of the bulk of any settlement received through their 'foundation.'

"When he meets Luján [Martina Gusmán (Lion's Den)], an overworked medic who is wrestling with her own demons as she tries to save the lives of Sosa's 'clients,' he has a dramatic change of heart, but his plans to escape this life and change his ways go horribly awry. With crisp, tight editing, this lean and suspenseful thriller takes us through accident sites, hospital wards, and seedy interior settings that would be perfectly in place in a Hollywood noir. Carancho is the latest example of director Trapero's trademark socially realistic cinema."

Carancho explores the notion that "behind every tragedy, there is an industry." As Diana Sanchez detailed in her program notes for Carancho's North American premiere at TIFF 2010, Trapero's film is "a story drawn from the alarming violence on his country's streets" and "an engrossing love story set among people who trade in sudden tragedy and death." Tracking the film's press notes, Sanchez writes: "Each year, more than eight thousand people are killed on the road and over a hundred thousand are injured. As a result, a disturbingly large part of the Argentine economy revolves around traffic accidents, and a profit stands to be made from the ongoing flow of medical expenses and insurance claims. Trapero's sixth feature plunges into this murky world of opportunism, spotlighting the crooks that swoop in on emergency rooms and accident scenes."

At Twitch, Todd Brown reported from the film's Cannes premiere: "A film that fuses stellar character work and intimate drama with larger thriller and heist moments with a few elements of shocking violence thrown in for good measure, Carancho is a masterful piece of work from writer / director / producer / editor Pablo Trapero. Trapero serves notice here that he is one of the very best film makers in the world today. Period. The complexity of his characters, the technical quality of the film work, his ability to balance intimate emotion with realistic and brutal action sequences, his obvious skill in working with actors--though that is made easier when you have actors the caliber of [Ricardo] Darín to work with--Trapero is at the highest level in all of these. Flawless? Carancho comes pretty damn close." As if to cinch the deal, Brown has included Carancho in his year-end top picks, emphasizing that "Ricardo Darín anchors Pablo Trapero's Carancho with a riveting, complex performance as a broken man slowly unraveling thanks to the tiny moré of conscience he retains. Classic noir in content if not in style, Trapero's film spins its amoral tale of insurance scams and ambulance chasing in as unaffected a style as possible, letting events play out in a cold, almost clinical fashion as his characters stumble inevitably to a bad end. The always stellar Darín has never been better and he's perfectly matched to both director and story."

At MUBI, Daniel Kasman praises Trapero as a steady, sure-handed genre craftsman. Kasman reported from TIFF: "Carancho has the solidity of construction and reliance on conventional character types and story arcs to effectively normalize a highly specific and localized setting. The result, like an early '30s Hollywood entry, is a workman film, one made by a director prodigious enough to pick such a unglamorous setting and proceed to cast it in a reliably realistic and unappealing light--'cause that's the way it really is. ...The film is so solid that any room for ambiguity is left out of the digital masonry of the mise-en-scène, which builds a clear schema where, simply, anyone involved in the nocturnal world of deaths and near-deaths, accidents and 'incidents' is implicated in the gloom, no questions asked. Thus the modest ambitions of a genre film stay within its modest limits, rather than escaping into the unease of the shadows, blossoming within gray shades of morality, or aesthetically expanded in risky angles, lighting, and other stylistics."