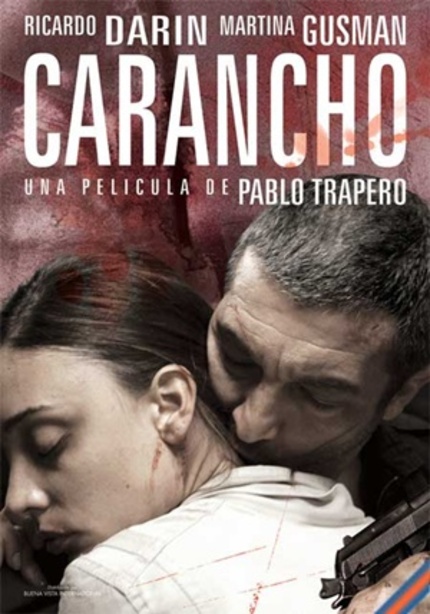 We are all familiar with the concept of the sleazy lawyer, the vulture who lurks on the outskirts just awaiting his chance to swoop in and profit on others' misfortune. Pablo Trapero takes that image as the center of his stellar, genre defying, latest effort Carancho.

The always-stellar Ricardo Darin is Sosa, a man with a hidden history who now ekes out a living working as a personal injury lawyer, scanning the police radio and chasing ambulances to find poor people caught in misfortune and handle their insurance claims - always being sure to skim a healthy percentage for his employers.

It is while working his nightly rounds that Sosa first meets Lujan (Martina Gusman) a young doctor who, like Sosa, carries an awful lot of weight and history in her eyes. Sosa knows seemingly immediately that Lujan is the woman for him. She needs some convincing, but the two are nevertheless drawn inexorably together.

And this is when we learn that Sosa's sleaze goes beyond an unfortunate profession and into outright criminal behavior. A job goes wrong, someone ends up dead and Sosa's life - so close to achieving happiness - crumbles.

A film that fuses stellar character work and intimate drama with larger thriller and heist moments with a few elements of shocking violence thrown in for good measure, Carancho is a masterful piece of work from writer / director / producer / editor Pablo Trapero. Trapero serves notice here that he is one of the very best film makers int he world today. Period. The complexity of his characters, the technical quality of the film work, his ability to balance intimate emotion with realistic and brutal action sequences, his obvious skill in working with actors - though that is made easier when you have actors the caliber of Darin to work with - Trapero is at the highest level in all of these. Flawless? Carancho comes pretty damn close. With one day left for me here in Cannes, this is the film of the festival for me.