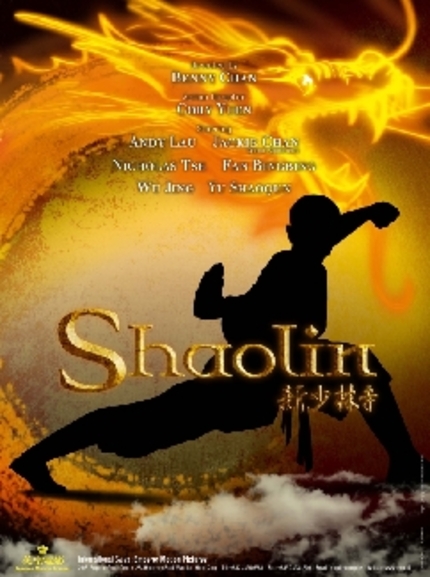 The more we see of Benny Chan's Shaolin the more it appears that the big budget all star production could end up going down as Chan's master work. The production values are fantastic, the cast rolls out star after star, and all of it seems to fit together to create a sumptuous old school martial arts epic.

It is the early years of the republic and China has been plunged into chaos as feuding warlords battle to expand their power and their lands. Young army leader Hao Jie and his sworn brother Huo Lung find little resistance in their conquer of the township of Dengfeng, leaving thousands injured and dead in their wake.

The venerated Shaolin Temple throws open its doors to the wounded. Disciples Jing Neng, Jing Kong and Jing Hai venture out in the day to save the villagers and at night, become masked Robin Hoods to help the poor and weak.

When Hao Jie learns that temple disciples are helping his enemies, he challenges the temple's kung fu. The abbot purposely loses the fight to Hao Jie and the latter becomes even more arrogant. But Hao is forced to repent when the shock betrayal of Huo Lung wipes out his whole family and he is forced to seek refuge at Shaolin. While recuperating at the temple, Hao has the chance to learn Shaolin's powerful martial arts from the crazy monk Wu Dao and find inner peace.

However, his wife Xue Yan has difficulty coping with the loss of their daughter and decides to seek out Huo Lung for revenge. In the meantime, Jing Neng, Jing Kong and Jing Hai also have a confrontation with Huo. The encounters anger Huo Lung who brings his army to besiege Shaolin and the peace-loving monks are forced to take up arms to protect the refugees and their beloved temple...

I just watched "City Under Siege", and let me tell you: it wouldn't take much for "Shaolin" to be better.

I agree with keeperdesign. On a serious note I do think this looks great. I also think the original looks better. The villain had like a beard and knight armor.