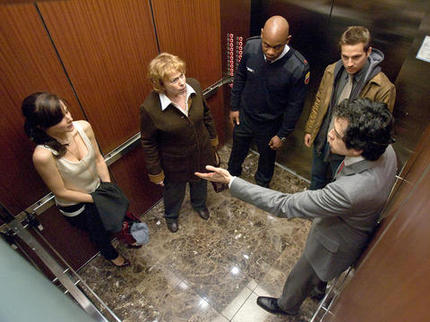 M.Night's reputation as of late has been ruined with the slew of mediocre to awful films he has been releasing after his more interesting days of Unbreakable and of course The Sixth Sense. Unfortunately he creates another wasted opportunity with Devil. This thriller centers on a group of trapped individuals that are essentially all 'bad' in their own way and unknown to them await the devils judgment. One of these very individuals is the Devil however although it is difficult to determine who that is exactly as none of them act particularly human.

The film was well shot with jarring images of sharp sky scrapers and the music accompanies it well although at times feels directly lifted from the Inception soundtrack. There are no particularly bad actors just cookie cutter roles that they fill. What makes little sense are the random deaths that befall the people outside of the lift, regardless of the flaky exposition voice over explaining that the Devil destroys all that gets in his way. One worker in particular goes above and beyond his janitorial duties, abseiling down an elevator shaft right after an ominous and potentially lethal incident or two he encounters, but subsequently ignores prior to this. Needless to say he meets his expected doom.

Speaking of expected, there is little to no tension in Devil which is practically unacceptable given the thrilling premise. If the entire film took place in the lift and carried on with its claustrophobic camera angles which perfectly captured the desperation and emotions elicited by the increasingly irrational individuals then tension could easily have been maintained. This idea unfortunately was half hearted and more often than not the rescue operation and reactions outside the lift are captured in a monotone way, constantly taking the viewer out of the frying pan, unlike Buried which gets under the skin.

The rest of the film deals with a lift that conveniently goes dark when someone inside, particularly the person the police outside have concluded is the killer, is murdered or maimed. This formula repeats until there are only two true suspects left and it is truly groan worthy material, particularly the big reveal of the Devil.

Thankfully M. Night Shymalan did not direct this, but it did still come from his 'mind' as the advertising boasts. He seems to be riding a wave of mediocrity after the impact and truly memorable twist of The Sixth Sense. No twists or originality is remotely evident in Devil. It overrules with a surprising amount of logic and actually comes full circle to explain all involved and their connection to each other, it would all make sense and probably work a little better if there was no unholy deity in the way of everything. A mystery thriller is then transformed into a tame horror.

This may as well be Saw lift edition; all the themes are here; the guilty get punished and the twist is strangely familiar. I do not eagerly await the second Night chronicle.