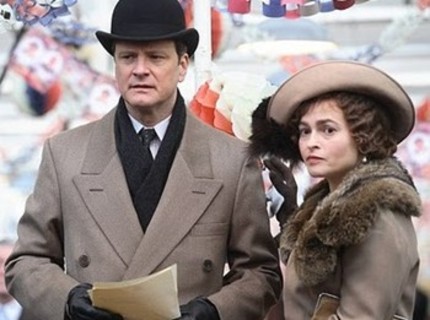 Winner of the Cadillac People's Choice Award at TIFF 2010, it's hardly surprising that The King's Speech would be getting probably the most attention of any film at LFF this year. It tells the story of the Duke of York, later King George VI, and his attempt to overcome a near debilitating stammer. It being necessary to speak in public on a regular basis, now that radio had forced the British Royal Family out of their traditional stoicism, Bertie (as he was known to family) eventually entrusted an failed Australian actor, Lional Logue, with the job of helping him improve his speech. Telling any historical biography is difficult, especially when most people (at least in the UK and likely Canada) are aware of the major facts: how Bertie had never sought the spotlight, how his brother, Edward VIII, abdicated in order to marry American divorcee Wallis Simpson, and how that ended up being for the best, as King George VI and his family engaged with the public as the Royal Family had never done before in one of Britain's darkest times. In order to make such a film and not have it lapse into cliché or predictability, you need strong actors and a good script. Luckily, director Tom Hooper casts Colin Firth and Geoffrey Rush as Bertie and Lionel respectively, and screenwriter David Seidler finds the humour and subtlety to raise the film far above the average historical biopic.

As Bertie's wife, the future Queen Elizabeth, later known as the Queen Mother (played skilfully if slightly oddly by Helena Bonham-Carter) points out, being a member of the Royal Family is a kind of indentured servitude: there may be many privileges, but in reality few rights. As mass media such as newspapers, magazines, and in the late 1930s, radio, became more important, it exposed the famous to greater scrutiny. For someone like Bertie, who only found comfort with his wife and daughters, the increasing pressures of public life and the unavoidable duty of public speaking were humiliating. Hooper has the camera follow his actors, as oppose to the other way around; in doing so, it gives a greater understanding of how now these people finds themselves constantly in the spotlight.

The film is carried by the incredible performances of Firth and Rush. While this might seem hardly surprising given their pedigree, they must create a strange intimacy. Members of the Royal Family almost never interacted with "commoners" except in an official capacity; they did not have friends outside of their family. Rush's Logue is a flamboyant but caring man, with a great capacity not only for dealing with the mechanics of speech impediments, but understanding the underlying psychological causes. Logue's dialogue seems to be tailor-made for Rush's deadpan wit and impeccable comedic timing. His insistence on informality causes initial discomfort to Firth's Bertie. This Bertie is a kind, intelligent man who has not had an easy time as such in a family like his, with an overbearing father, distant mother and flighty elder brother. When he finally opens up to Logue about the physical and emotional abuse he suffered as a child, he does so in such a matter-of-fact and well-mannered turn of phrase that makes the pain of it so much more acute.

This is a story of faces and voices. The face and voice we want to show to the world, the ones the world sees, and the ones the world accepts or rejects. As the second son, Bertie was never given enough credit or understanding; as an Australian in 1930s Britain, it was the same for Logue. Bertie had little choice in his role in life; Logue perhaps had dreams that were never realized. Hooper pulls off a rarity in the current trend of historic biopics: he goes beyond the paint-by-numbers run-down of a famous person's life to try to understand the man behind the image. Firth is not imitating, he is embodying and revealing one's man struggle with an unwanted destiny. Hooper does not rely on fancy flourishes of art direction or scenery; rather he keeps his camera close to the actors, allowing them to tell the story. Even knowing the outcome, the film is a very fine journey.