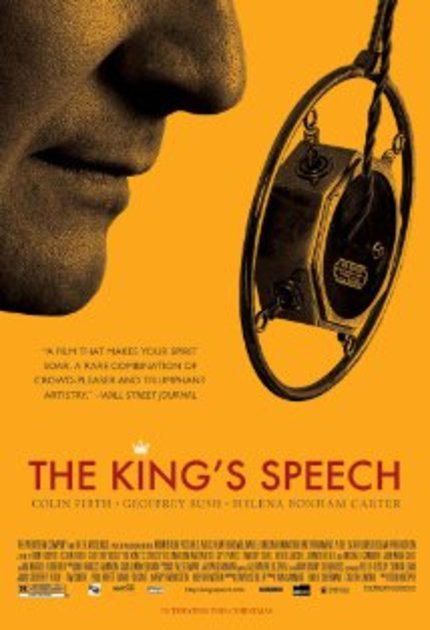 Going into "The King's Speech", it's hard not to be cynical. After all, before viewing even one frame of the film, it's already begging for Oscars. All the pieces are in place: A historical picture (check) about the British Royal Family (check) during wartime (check). A formidable, upper-crust cast (check) led by a skilled actor whom many feel is due for award treatment (check) playing someone with a disability (check-check). All cooked up as a classy yet assessable end of the year meal by ace award mongers Harvey and Bob Weinstein. It's as though scientists gathered in a lab to create the perfect Oscar winner. And maybe that's just what the movie will be. Like I said, going in, it's easy to be cynical. It's staying cynical once they film gets going that's the harder part.

World War II is ramping up, and the recently crowned King George VI has a problem. It's up to him to rally England, to boost morale, but that's hard to do when one is saddled with a nasty speech impediment. The king (played brilliantly by Colin Firth) must give the necessary rallying speech to his nation, and not stutter. Not only not stutter, he really needs to knock this one out of the park (to use an American analogy). Can he do it?

Thankfully, at the urging of his always-supportive wife (Helena Bonham Carter) he's been meeting with a groundbreaking speech instructor - actually an unsuccessful actor, played with gusto by Geoffrey Rush. The relationship between the two men, although adversarial at first, predictably develops into something quite close, and vital. It is the friendship of these two men that is not just the heart of the film, but also the point of the film. It's as deep and as simple as that.

Of course the period set decoration and costumes are immaculately spot-on. The direction of Tom Hooper (best known for helming the HBO "John Adams" mini-series) is never dull, as he keeps things moving along at an admirably brisk pace. Along the way, Michael Gambon and Guy Pearce show up in supporting roles as members of the royal family. The involvement of these actors is almost always a good thing, and "The King's Speech" is no exception.

Consequently, despite its fringe dealings with the war and disability, "The King's Speech" is not at all heavy, nor is it particularly challenging. But that's perfectly okay, as the film does nearly perfectly what it sets out to do. It may not pack the mental wallop of something like "Black Swan", but like that film, "The King's Speech" can boast nary a false move. It may go down easy, but it also goes down well.