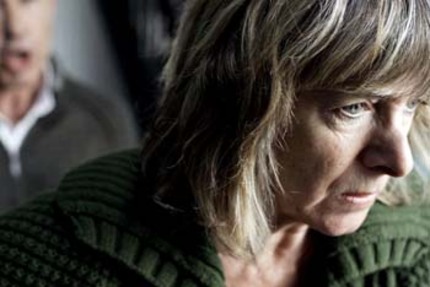 [As it is getting its US Release today, here is my Review of Down Terrace, go see it, especially if you are a fan of the deadpan Coen Brothers sense of black-humour.]

Upon being released from custody for some petty larceny, Ben and his son Karl, small time gangsters both, return home more or less in silence for an awkward couple of beers and stale pound-cake with their mates.  Karl's girlfriend comes by to celebrate, but her belly belies a quite pregnant figure.  Karl's reaction is perfect in its purity: "Fuck!"  The following, well that's that then on the surface, panic very much underneath, encapsulates the dysfunction and overall incompetence of the men in the family, and how they project their issues upon themselves and their kin.   Nobody does people behaving badly towards one another with a low key passive-aggressive narcissism (played for pathos and laughs, naturally) quite like the Brits.  Equal parts sitcom-from-hell and verite-family-drama, Down Terrace makes the most of its low budget and limited location by virtue of a wonderful collection of actors and non-actors ripping each other to shreds (both figuratively, literally) due to far to close proximity.   Insofar as Reservoir Dogs is a heist movie without the heist, Down Terrace is a gangster picture without the gangster stuff, trading instead in uncomfortable family anxieties and loaded banter until things come to a head.  If the film came out in the Sundance heyday of Quentin Tarnantino and Kevin Smith, writer-director Ben Wheatley would quite likely be a made man.
Posturing, bantering, sparring on screen as an insight to character, relationships and story is a delicate thing.  As Nic Cage finds out in (underrated) The Weatherman, catching hell from the wife for forgetting the mayonnaise at the corner shop, is never about forgetting the mayonnaise, but a small release of pent-up-shit stemming from dozens of years of existing together under the same roof.  Most of the film takes place in a house in Brighton, Karl lives at home with Mum and Dad and participates in the family business) with a steady stream of low-lives coming in to drink, talk, play a little blue-collar folk guitar and occasionally (very occasionally)  talk business.  This is the lay of the land for watching the three way family dynamic of Bill, Maggie and Karl.  Everything is a slippery slope, like trying to juggle oil.
Sure there is some sort of rat to be sniffed out, some pressure from London about Bill's ability to hold his small corner of the world together, all these are external pressures are the triggers to see how these characters snipe, self-flagellate and silently plea for intimacy (think David Thewlis' Johnny in Naked with Pete Postlewaith's posture and face).  Bill is a well read,  ex-hippie who cannot seem to make a good (or final) decision about anything.  The man probably has not made his own cup of tea or bite of supper in decades, although can pontificate like a champ.  His verbose monologues on anything from toxin cleansing diets to radical drug-induced visions (note the contradiction there!) are a thing to behold, particularly considering that this is from a non-actor (Robert Hill) who is actually the father of his co-star and the films co-writer (Robin Hill) in real life.  It seems that Wheatley, and advertising and TV veteran, has been directing loads of these types of 'near-reality' short films with Robin and Robert for years and Down Terrace would be the ultimate culmination a lifetime of rehearsal.  The film is actually shot in Robert's own house.  It allows for a certain comfort of familiar surroundings for most of the creative parties involved to get into some pretty nasty, heavy business.  Within the story, that would be demolishing his sons ego to prop up his own set of guilt and anxieties.  One can only imagine how many echoes of real conflict are leavened into those performances.  And the movie contains a lot of fathers and sons, and anxieties of raising junior right.  It gives an interesting foundation for a film that starts layering on a surprising body count in the final third.  In a further revelation of subtlety and nuance, TV's Spaced landlord Julia Deakin plays Maggie, the distant, yet still controlling matron that indulges her son's angry freakouts and her husbands passive-aggressiveness because she is rather above it all.  Does she really love either of them, or is she just comfortable with the state things have evolved into over the years?  This is played in a darkly comic fashion.  Not the laugh out loud, gag-payoff-gag rhythm of a standard comedy, but the more react to the audacity and forthright with which peoples anxieties and over-compensation is laid out front and center.  Deakin shows it all with her face, body language, and a portent conversation with one of the crime families London bosses.  The awkward comedy made famous worldwide by those fly-on-the-wall Britcoms like The Office and The Thick of It may allow for North American audiences to get into the headspace of Down Terrace, but it does not quite prepare for just how far Wheatley and Hill are going to go. Winning acclaim at a number of festivals, including best screenplay and best first feature at Austin's FantasticFest (no small feat that, as festival that plays mostly zany and unusual horror, fantasy and science-fiction films), Down Terrace is certainly a film that proves that comedy is a matter of individual taste and sensibility, but there is certainly a growing audience for this type of thoughtful hybrid.  The communal libation is an Alkaseltzer tablet in water, a worthy image of all ulcer inducing bile sent forth in the name of getting along with one oneself and ones own.  Perhaps the greatest tragedy is that the small family considers itself "No better or worse than anybody else."  For all of Karl's exhaustion with his fathers bullshit and his mothers seeming indifference, he is clearly going to end up exactly like them both.  And there is a child on the way.  Now that is comedy.
Sign-In to Vote
Tweet 0 Submit

Do you feel this content is inappropriate or infringes upon your rights? Click here to report it, or see our DMCA policy.
Ben WheatleyRobin HillRobert HillJulia DeakinDavid SchaalComedyCrimeDrama