Fantastic Fest 2010: SOMOS LO QUE HAY (WE ARE WHAT WE ARE) Review 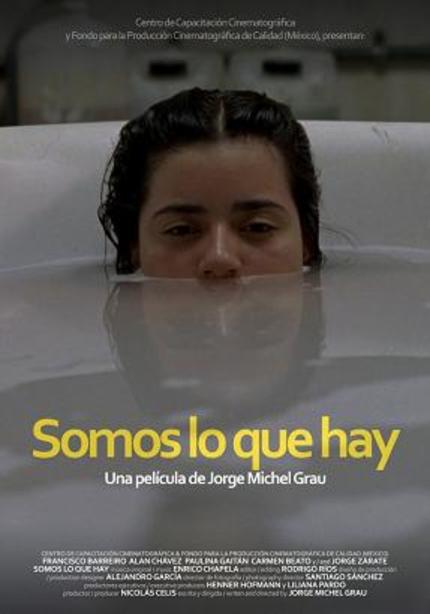 "Slow building" is the description that comes immediately to mind, and at least a half dozen people had the same reaction immediately after the screening, including myself, either through Twitter or in person. WE ARE WHAT WE ARE, which just won the Best Film award for the AMD Next Wave section at Fantastic Fest, as well as a nod for Best Screenplay by writer/director Jorge Michel Grau, definitely is not in a hurry to get where it's going. Ultimately, however, it's worth the journey.

Making his feature debut, Grau creates a suitably grotty atmosphere for his dysfunctional family drama. When Father doesn't return home as usual, Mother and her three children must decide how to put food on the table, a normal concern that is even more pressing because they are a family of cannibals.

After all, you can't just go to the supermarket and expect to pick up enough human flesh for a family of four. Besides that, with the family leader dead, a new leader must be chosen, rituals performed, and secrets protected.

Though Mother is strong-willed, and daughter Sabina (the lovely and powerful Paulina Gaitan, from SIN NOMBRE and TRADE) appears to be better suited for the role, the consensus is that older brother Alfredo (Francisco Barreiro) should assume the leadership position. He's not at all certain that he wants the job, especially since he can't really control his younger brother (Alan Chavez), who has a ferocious appetite for life (pun intended). The kid is filled with energy and fury, and he bears more than a passing resemblance to Johnny Boy, Robert DeNiro's character in MEAN STREETS.

The film as a whole, however, is much more constrained in the expression of emotions than Martin Scorsese's classic. It's as though every character wants to scream but doesn't want anyone to hear them. That's a fitting way to depict a family of cannibals living in secret in a large modern-day city, though it makes it more challenging to get involved with the story and care about what happens to the characters, or even to fully understand their motivations and actions.

Also, it's not entirely clear if the world as seen in the film is intended to be entirely the same as our own. Once the police begin to suspect that the family's late patriarch may have eaten people, the investigating detectives seem to have no problem accepting the idea that they're looking for a family of cannibals; one of them even says that cannibalism is much more common than you might think: "a lot of people go missing."

The interplay between the three teen-aged children lends a hard-core edge of reality. They love one another and are, obviously, highly dependent, much more than normal siblings, on each other. Mother is a firm, distant woman, and is so sure in her actions that you're left wondering what kind of man the father was. How did he rule this tiny brood? Or was he the family head -- the one who decides who to eat -- in name only, held in place by custom and tradition?

What lingers in the memory, though, is the atmosphere of dread and the desperation of the family members. And an absolutely killer resolution.