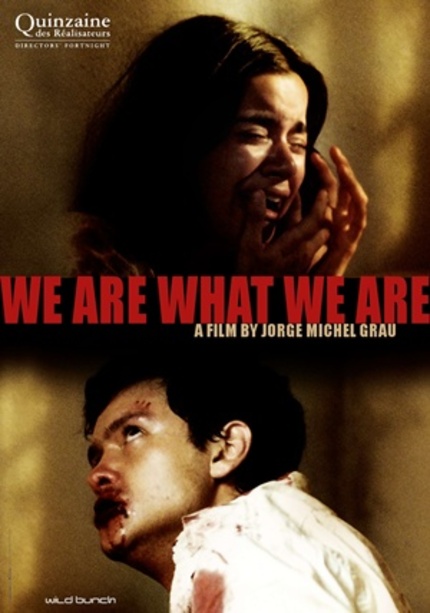 Right on the heels of winning the prestigious Next Wave Awards for Best Film and Best Script at Fantastic Fest - and immediately before its imminent arrival at the Sitges festival in Spain - a new trailer for Jorge Michel Grau's Mexican cannibal picture We Are What We Are has hit the web in advance of the UK release. This is an entirely new trailer and it's a damn good one, one that establishes the characters, tone and story of the piece entirely without dialogue. Nice.

A middle-aged man dies in the street, leaving his widow and three children destitute. The devastated family is confronted not only with his loss but with a terrible challenge - how to survive. For they are cannibals. They have always existed on a diet of human flesh consumed in bloody ritual ceremonies... and the victims have always been provided by the father. Now that he is gone, who will hunt? Who will lead them? How will they slake their horrific hunger? The task falls to the eldest son, Alfredo, a teenage misfit who seems far from ready to accept the challenge... But without human meat the family will die.

Shocking, bloody and deeply moving, WE ARE WHAT WE ARE is a remarkable reinvention of the horror genre - a visceral and powerfully emotional portrait of a family bound by a terrible secret hunger and driven by monstrous appetites.