Well Go Picks Up LEGEND OF THE FIST: THE RETURN OF CHEN ZHEN For North America. 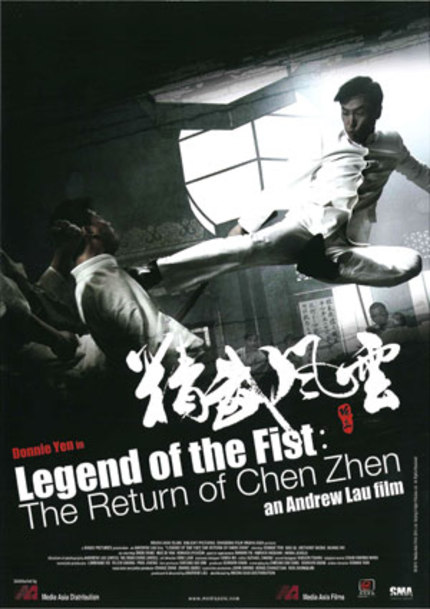 The headline says it all, really. Fresh on the heels of the film's premiere at the Toronto International Film Festival being announced, Well Go USA have announced that they have picked up all North American rights to Andrew Lau's Legend of the Fist: The Return of Chen Zhen. Yes, it will be coming out theatrically. Here's the official announcement:

"Doris Pfardrescher's enthusiasm for Legend of the Fist: The Return of Chen Zhen and its star, Donnie Yen, has been unparalleled," said Fred Tsui, Assistant General Manager, Media Asia.  "We are thrilled that Media Asia and Well Go can work together on this blockbuster and are convinced that with Well Go's extensive distribution network and knowhow, this film can reach the largest audience base possible in North America."

Seven years after the apparent death of Chen Zhen, a mysterious stranger arrives from overseas and befriends a local mafia boss. That man is a disguised Chen Zhen, who intends to infiltrate the mob when they form an alliance with the Japanese. Disguising himself as a caped fighter by night, Chen intends to take out everyone involved as well as get his hands on an assassination list prepared by the Japanese.

Previously, the character of Chen Zen has been played by the legendary Bruce Lee in Fists of Fury and Jet Li in Fist of Legend, among others.