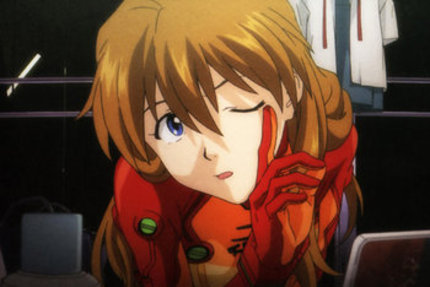 [With the latest Evangelion feature taking a bow at Fantasia today now seems a good time to revisit my earlier review from Sitges.]

When the five feature revisioning / relaunch of Hideaki Anno's seminal anime series Neon Genesis Evangelion was announced a few years back the response amongst fans was immediate.  Though none were quite certain whether this would be a simple re-edit / re-animation of the original show or something larger and more involved the prospect of the show finally being given the visuals to truly match the scope of Anno's vision was cause for celebration.  Official talk was that this was not a mere buff and polish, but there was skepticism that the changes would not run more than skin deep.  After all, why spend the money to completely recreate something already enormously successful?

But then the first of the new features arrived.  Though dominantly a compression of the first block of television episodes, Evangelion 1.0: You Are (Not) Alone featured a slightly altered approach to its protagonist - youthful pilot Shinji Ikari, pressed into service piloting a massive robot to battle invading Angels by the father who abandoned him years before - and a sharper focus on the core elements of the story that promised good things to come.  Perhaps the PR line about major changes being in the works was more than just a line.  And with the arrival of Evangelion 2.0: You Can (Not) Advance that hope is richly rewarded.

Straddling the line between honoring the original source material and a full re-imagining, this new feature is where the shifted focus becomes abundantly clear.  While the core mythology of the epic remains untouched, as do the relationships between the principal characters - producers have sharpened and focused things dramatically here.  Eva 2.0 heralds the arrival of not just fan favorite Asuka Langley - plunging Shinji into a confusing world between two attractive young women - but also of an entirely new character, a new pilot who appears on the scene from Europe.  More attention is paid to the relationship between Shinji and his father, while the true aims of military organization NERV and the shadowy power behind the scenes begin to come in to focus.  Eva 2.0 pushes the story along so efficiently that it appears clear that the third film should bring us to the end of the story as presented in the television series before moving on to the final two films for the finale.

The changes to the story are all wise ones, all moves that bring the core ideas and themes into sharper focus while jettisoning some of the more frivolous elements.  And, likewise, the new animation is a big step forward from the original series - a made for tv production whose humble budget often placed serious limits on what director Hideaki Anno and company were able to achieve.  This new Evangelion is simply gorgeous to look at.  Whether an epic robot battle - of which there are many - or a more quiet moment, the visual work is absolutely top notch and a wonder to behold.

The negative side to Evangelion remains the same as it has always been.  With its incredibly dense mythology - a fusion of scifi tropes with Kabbalah - Evangelion was always a show that demanded its audience stick with it right from the beginning.  This is as true now as ever.  Fans of the original series will be able to keep up with this feature fine but to truly grasp everything that's happening it is best if you watch Eva 1.0 first and those who have not yet been introduced to the saga very definitely need not bother with this film at all until they have started properly from the beginning.  Eva is not really an experience for casual viewing.  It is - much like the graphic novel incarnation of Watchmen - a watershed moment in its particular genre, a dense and challenging work that manipulates and transcends many of the typical themes of these types of stories.  And, like any work of literature, it demands that you conform to the demands that it makes upon you.  Put the time in and you will be richly rewarded, with all signs being that this new series of features will truly be the definitive version, but make sure to start at the beginning.

Evangelion: 2.0 You Can (Not) Advance