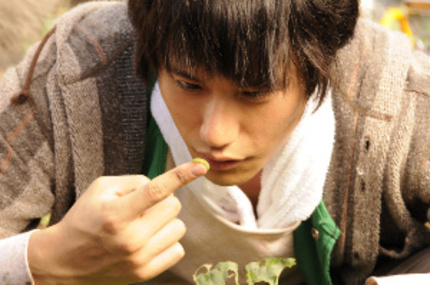 Yojin (Kenichi Matsuyama, best known as L in Death Note series) is a twenty five year old man-child living in a rural town in Aomori with his grandmother. He's not dumb. As he describes himself, his brain is wired differently. He is prone to outbursts and childish behavior. Yojin's daily routine begins with half a dozen alarm clocks and schedule written on the white boards in his room, as he forgets things frequently. He listens to his late grandfather's audiotape instructions on how to grow vegetables and follows through rather unsuccessfully and helps out his grandmother to sell her organic vegetables in town.

Everything changes when Matsuko (beautiful Kumiko Aso) arrives in town from Tokyo. She is a sullen kindergarten teacher who lost her boyfriend in a horrible car accident where his head was decapitated and never recovered. She came to Aomori to consult a medium to see if she can still communicate with him. Yojin is smittened right away but Matsuko's frightened by his erratic behavior. After getting showered by pesticides while playing with a local boy, he finds that pesticides keep his brain calm. Since Matsuko prefers his 'new', less spastic self, Yojin keeps spraying himself with the harmful chemicals in the hopes of her liking him back. The effects actually make him sick and he dies. Then he's alive again, only until he dies the second time!

Okay, on paper, Bare Essence of Life is goofy as hell. Its plot is shoddy and the mix of realistic settings and surrealistic elements doesn't always work. But Satoko Yokohama's film is completely original and fresh. There are lovely scenes of Yojin walking Matsuko home at night. She talks about evolution being stopped as humanity makes its world safer and further controls unpredictable elements like Mother Nature. You have to live freely without fear in order to evolve. Without cutting back and forth, Yokohama lets dialog flow in these natural, intimate one-shot long takes. With its two hour running time, Bare Essence is a leisurely paced contemplation on many elements- new age spirituality, heart vs. brain, nature vs. technology, self-sacrifice, (possibly) autism and cyclical nature of life, all in sunlight drenched beautiful rural Japan. Maybe Yojin with his ability to talk to a dead man with no head is us humans' next evolutionary step? Messy but always engaging with great two lead actors and charming supporting cast largely comprised by the non-professional locals, Bare Essence of Life promises yet another great woman director with unique voice emerging from current Japanese cinema.

Dustin Chang is a freelance writer. His musings and opinions of the world are found in dustinchang.com