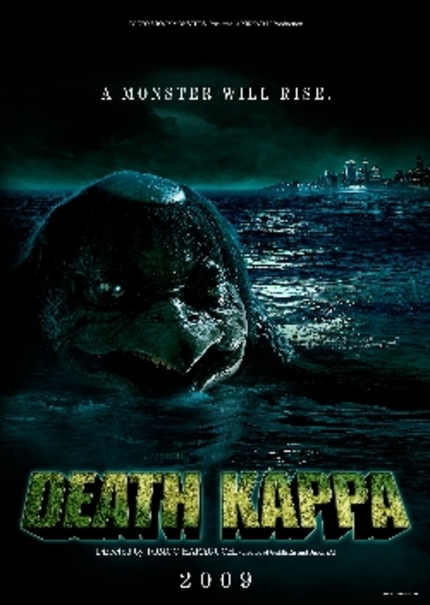 What better way to kick off our coverage of the 2010 New York Asian Film Festival, than with a review for a kaiju monster movie? Our thanks to Mark Popham for the following review.

Here's the thing- I get it, I totally get it. I love cheesy kaiju movies, I love guys in big rubber suits, I'm even into the nonsensical plots (roach aliens! mind-control rays!) that lead up to the Summoning of Godzilla or the Blowing of the Gamera Horn or what have you. If there is an audience for a kaiju parody movie I am it. And still, DEATH KAPPA just didn't do it for me.

DEATH KAPPA follows a failed J-pop singer returning to her rural hometown to care for her grandmother. She isn't off the train for ten minutes, however, before Granny is run down by a carload of drunken teens, expiring in our heroine's arms after begging her to "protect the kappa", the local mischievous, cucumber-loving water spirit. Soon enough, there's a real life kappa, a trio of murderous fishmen, the corpse of a mad scientist and an atomic explosion that heralds a full-bore kaiju battle. Fire is breathed, buildings are crushed underfoot and the end of the world is averted by a singing maiden. All of the generic requirements are fulfilled, so why aren't I satisfied?

I guess I just wanted more. I feel like there's a tendency in a lot of "zany" movies to take a funny concept, put it on screen and leave it there to die; add in some of the most indulgent editing I've ever seen and you end up with a movie that's not just overlong, it's flat out awkward. Some of the jokes are weirdly juvenile- the train station agent is a leering hunchback with those fake Billy Bob teeth, soldiers scream "MOMMY" before dying- and there are whole segments without anything resembling jokes, which means for whole segments you're basically just watching a straight-faced, poorly edited kaiju film. That doesn't really do much to get me out of the house these days; Target was selling the first season of Ultraman for $5 last month.

Don't get me wrong- I'm glad DEATH KAPPA exists. I just hope they remember the jokes by the time it fights MECHA-DEATH KAPPA.