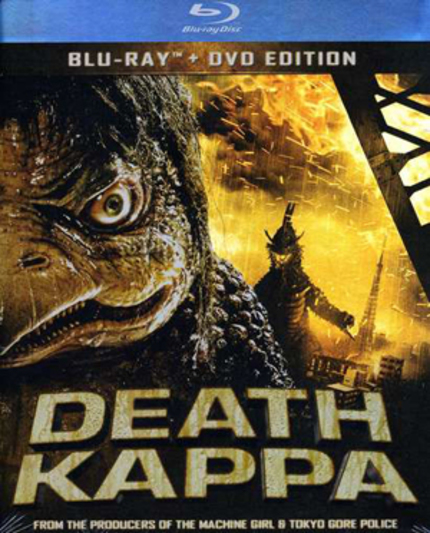 Terror approaches from the depths of legend!

When military experiments go haywire and trigger an atomic bomb, the consequences are of epic proportions. A monster arrives in the midst of the nuclear fallout, and Japan's defenses are helpless against it. Mankind's only savior is an irradiated water goblin from Japanese folklore called the "Death Kappa". The two rival monsters must go head-to-head in the ultimate battle between good and evil!

Men in suits!  Who doesn't love men in suits?  Assholes, that's who!

Death Kappa's cinematic antecedents are clear.  The film attempts to recreate the classic kaiju films of the 50's, 60's, and 70's.  This was a time when Godzilla and Gamera ruled the screen, and the films from that era hold up remarkably well.  In the last ten or fifteen years there have been several attempts to resuscitate the kaiju film, and they have varied wildly in quality.  Death Kappa is unlike most of these.  It's tongue is placed firmly in its cheek, and it owes more to the recent low-budget Japanese video fare than it does to the classics.  But was it any good, I suppose that's a bit more subjective.

We've been very interested in this film from the beginning, however, when the final product was unveiled, ScreenAnarchy kinda went flat. Ben Umstead saw it at NYAFF 2010 and said:

Here's the thing- I get it, I totally get it. I love cheesy kaiju movies, I love guys in big rubber suits, I'm even into the nonsensical plots (roach aliens! mind-control rays!) that lead up to the Summoning of Godzilla or the Blowing of the Gamera Horn or what have you. If there is an audience for a kaiju parody movie I am it. And still, DEATH KAPPA just didn't do it for me.

A couple of weeks later, Peter Galvin saw it at Holehead 2010 and said the following:

You'll never catch me declaring Death Kappa a good film, but it never pretends to be. It's good for a laugh. Two laughs? Well, mileage will vary.

At 75 minutes, Death Kappa will be either just the right amount of fun or a real struggle, depending on how funny you find watching the big rubber suits crush plastic models. Boys will be boys, after all.

Well, I must concur.  I was hoping for a full-on classically styled kaiju monsterfest, but what I got was less than that. Death Kappa, instead, begins like a typical low-budget Japanese films along the lines of Machine Girl or Tokyo Gore Police (all three were produced by the same company), and doesn't really get the kaiju action going until the second half.

The film begins with the Kappa and his keeper, a failed J-pop singer who goes back to her home town to care for her grandmother.  This results in a lot of goofy Kappa dancing and bad J-pop songs.  I was not expecting that at all.  Later on, sort of out of the blue, an evil kaiju lays waste to Tokyo.  A few minutes into his rampage, Kappa shows up and takes him on.  All of the kaiju action takes place on the typical miniature sets, however, the quality of the miniatures is significantly less than what you'd expect.  Buildings sway in the breeze, many of the human characters are nothing more than puppets, and not even puppets with any articulation.  It is more of a parody of kaiju than an homage.  That threw me, because if you watched the trailer, it looks like a real attempt to capture the 60's spirit.

It was a fun film, don't get me wrong, but just far too disjointed.  I never really knew where it was going or why anything was happening.  Even in the goofiest of classic kaiju, there is some sort of plot, but Death Kappa attempts to survive without any plot at all, and I think that is where it fails.

The good news is that Tokyo Shock have provided Death Kappa with a beautiful Blu-ray.  After the seriously flawed Blu-ray of Ichi the Killer, I was a bit wary, but Death Kappa is a killer in HD.  Luckily for all of us, the film was shot in high definition, so there's very little to screw up between the original and this duplicate,  Colors look great, the detail is remarkable, and overall, the movie looks as good as it possibly can.  The audio is similarly good, if a bit flat.  I'm fairly certain that Death Kappa didn't have a particularly complicated sound design in the first place, but what we get here are two DTS-HD MA 5.1 audio tracks, one in Japanese, and one in English, which might not be a bad choice for this particular film. Great job Tokyo Shock!

Tokyo Shock have also provided a decent amount of bonus material for this film, most of which is sort of cool.  There is a behind-the-scenes featurette focuses on the miniatures and the kaiju action, and less on the pastoral sequences. There is also an extended music video for the J-pop song in the film, sort of weird, but strangely mesmerizing as well.  The things I found most interesting were pre-production videos from Fever Dreams.  There are 4 or so of these and they seem to be sales reels.  Statements from Fever Dreams CEO and the director are included, as well as concept art for the film.  It provides an interesting inside look at the film and what they were aiming for as well as the sales strategy for the film.  Rounding out the extras is the spectacular trailer for Death Kappa, along with a DVD version of all of this.

I liked Death Kappa, but I expected to love it.  I guess that's what having expectations will do to you.  Either way, Tokyo Shock have really done a great job with this title and I heartily recommend this Blu-ray/DVD combo.