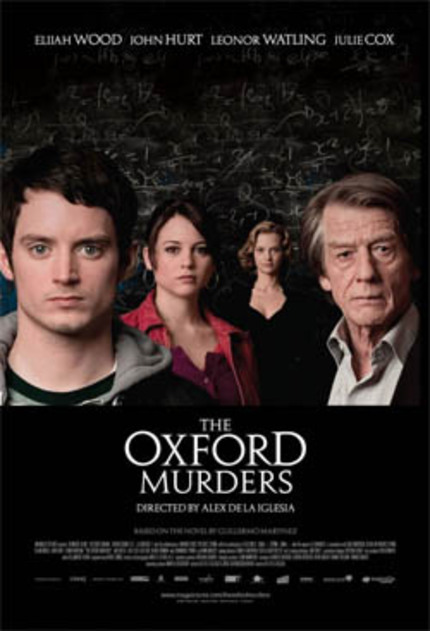 Spain has been the recent meccha for interesting genre films (off the top of my head, Abres Los Ojos, The Abandoned, [REC], The Others, The Orphanage, Three Days, Time Crimes and Sexy Killer.)  And one of the godfathers of recent rise has been Álex de la Iglesia who has made a wide collection of films that spans many genres with his own gallows humour spin.  While his resume is not spotless (can anyone out there sit through 800 Bullets?) it is certainly strong enough to warrant confusion when his 2008 serial killer film, The Oxford Murders, which happens to star John Hurt, Elijah Wood and Dominic Pinon never appeared on these shores.  But two years after the fact, Magnolia has picked up the rights and are putting it out the film on VOD on July 7 followed by limited theatrical release on August 6.

The film has been out on DVD in Europe for some time, but it is nice to see it officially show up in the US (and hopefully Canada).
Sign-In to Vote
Tweet 0 Submit

More about The Oxford Murders

800 Bullets is a good film. Oxford, on the other hand, is an underwhelming turd, with one of THE worst sex scenes I've ever seen. (Hint: It involves Frodo and a plate of spaghetti. NOT sexy.)

I knew I might draw a few comments with that parentheses-ed aside! I found that to be the only de la Iglesias film that was overbearing and grating and not as fun or warm as it certainly thought it was. I prefer the directors morbid sense of black humour in Ferpect Crime and The Baby's Room.

i loved "el dia de la bestia", but his other movies are just ok.. (though they all have little pieces of greatness)

Amen, brother. That sex scene is awful. The movie itself is all kinds of boring. I tried really hard to like it but failed.

you americans have it easy, stay away from this unless you feel the need to scoop out your own eyeballs through boredom and the answer is yes...800 bullets was that bad! Have you had a [rec 2] theatrical release over the pond yet?? if not, its awesome well worth the stupid amount of money i had to pay just to travel to the nearest cinema, if yes then im a bell end and ill shut up!
P.S if anyone can help me(im talkin to you Todd or Kurt) when am i gonna be able to see A SERBIAN FILM,ENTER THE VOID and LIFE AND DEATH OF A PORNO GANG in the U.K

One of those genuinely so-bad-it's-good movies, a much rarer thing than people think. The laughable 'Maths is the Matrix' conspiracy theory, lines so unnatural it sounds like they just ran the original Spanish through Google's free online translator, the sheer impossibility of making Elijah Wood's sex scene look like anything other than awkwardly choreographed child abuse. Sheer bliss. Worth a watch any day, as long as it's free.