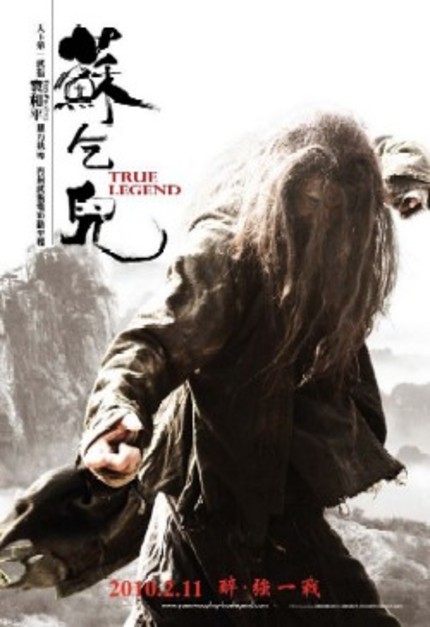 After leading a covert mission to rescue a feudal Prince, Su Can (Vincent Zhao) modestly defers the reward of a Lordship to his good friend Yuan (Andy On) in favour of continuing his martial arts studies and starting a family with Yuan's sister, Ying (Zhou Xun). Over the next five years Yuan becomes consumed by power and incestuous desire for Ying. Together with his army, he crashes Su's temple and murders the Grand Elder, whom it transpires murdered Yuan's father many years previous. Yuan's deadly Five Venom Fists technique overpowers Su and he is tossed into the river, left for dead. In despair, Ying leaps in after him and Yuan believes both have perished, taking their young son as consolation. Downstream, however, Su and Ying have been washed ashore and are taken in by the good-natured Dr. Yu (Michelle Yeoh).

Su Can, better known as Beggar Su (the literal translation of the film's Chinese title), is one of the Ten Tigers of Canton, whose martial arts prowess had a huge influence on many of today's disciplines. Su's eccentric Drunken Fist technique and general shambolic appearance set him apart from the others and have endeared him to storytellers ever since. Until now his most memorable screen incarnation was portrayed by Stephen Chow in THE KING OF BEGGARS, but when Yuen Woo Ping announced he was retelling the story with unsung martial arts star Vincent Zhao in the lead, there was understandable speculation that the mantle was about to be passed.

What is immediately evident from TRUE LEGEND is that Yuen Woo Ping has approached the story of Su Can's transformation into Beggar Su from an action director's perspective. Characterisation is scant beyond key traits such as "evil", "wholesome", "loyal" or "resilient". Yuen is never shy of skipping forward a few years, through periods of grief, disillusionment or even burgeoning insanity in order to get to the next action sequence and as a result it is difficult to share the inner turmoil of his protagonists.

The film opens at breakneck speed, as Su, together with loyal soldiers Yuan and Ma (Guo Xiaodong), mount a daring rescue inside a cavernous mountain lair, complete with rope bridges, a seemingly bottomless drop and hordes of heavily armed guards. It is a tantalising set up, but is quickly tarnished by a flurry of CGI flying daggers and a camera that won't stay still long enough to admire the fighting, which is already tricky to follow due to the darkness and multitude of similarly clad participants.

Things do improve. Within a few minutes we have skipped ahead five years and Su is married, with a young son and his martial arts school is fast becoming a reality. Yuan, meanwhile, has been mutating into a fearsome adversary. His skin sapped of any colour, his eyes black and sunken and his body covered by plates of dark gold armour that have been sewn directly into his skin - a move that he believes has made him immortal. He has also perfected the almost magical Five Venom Fist technique - a power that has clearly taken an unhealthy hold on Yuan himself - which infects the blood of his victims and sucks the life out of them with just his touch. It is a delightfully devilish piece of character design and Andy On does a great job hamming it up to the nines while dishing out some top-drawer whoopass when he arrives at Su's school ready to contribute some proper schooling.

The lengthy middle segment of the film is where the film's problems really lie. After being rescued by Dr. Yu (a brief and rather thankless role for Michelle Yeoh), Su embarks on the lengthy road to recovery, hoping to restore his confidence as much as the power to his damaged body. The pressures of his defeat and the death of his master weigh heavy and he takes to drinking the delicious wine Ying slavishly brews day and night. To point out that Ying has little hope of selling her wine in their secluded location, yet doesn't stop making it even after she begins lamenting Su's perpetual drunkenness, might border on the facetious. Either way, Su's increasingly unstable condition causes concern for his wife, while opens the doorway for lengthy training montages and the chance to encounter and train with the mysterious God of Wushu (Jay Chou) and the giggling, boozing Old Sage (Gordon Liu).

Chou has his fair share of critics, especially when it comes to his acting but here his deadpan, aloof manner brings the necessary arrogance to his role that encourages Su, through irritation and frustration as much as anything else, to keep striving to beat him. Much later, in the Russian-set third act, Chou's character returns for a final drunken confrontation with Su in a crowded bar and there he nails it, infusing precisely the right mix of intoxication, nonchalance and athletic prowess. Back in this mountainous 3D-enhanced dreamscape, we are treated to a series of high-intensity fights using a variety of weapons, as Su is repeatedly challenged by his deific opponent. Sadly the impact of these sequences is diminished by the regrettable decision to film them in rather shoddy 3D, that has no immersive or even "pointy pointy" pay off, serving solely to make the sequences uncomfortable to look at.

The 3D issue raises its head again during the big showdown between Su and Yuan, to the extent that it is actually a challenge to determine how much of the stunt work is real and how much involves visual trickery. Tantalising moments glimpsed in the trailer - including Su and Yuan shimmying up and down a well shaft - are frustratingly hard to fully appreciate because of the optical gimmicks enforced on the scene. The film will be screening in the traditional two dimensions in some theatres however, and overseas audiences will most likely be catching this on DVD where it won't be an issue, but it is regrettable to concede that this particular technical experiment failed to pay off the way we had all hoped.

In the final act, however, things really pick up. The action again leaps forward a few years and Su has fully embodied the drunken beggar of legend, shuffling through the streets of a Russian border town with his equally dishevelled son in a permanent wine-addled stupor. However, a chance meeting with his old war buddy Ma - now Governor of the Wushu Federation - ultimately sees Su sucked into a high profile contest against a troupe of Russian wrestlers, including Conan Stevens, managed by a shady Westerner going by the name of Killer Anton (David Carradine in one of his final screen appearances). While tonally, this final segment is something of a shift from what has come before and feels uncannily like a missing reel from FEARLESS, it is a much-needed injection of good old fashioned ass-kicking and the full realisation of Su's Drunken Fist fighting style. Sadly it should be noted that precious little is asked of Carradine in his brief role. He is on screen for only a few minutes and does little more than bark, "Get out there and kill the Chinaman" a few times, although he does so with great gusto.

The result of this strong finish leaves audiences on something of a high, but as that dissipates and the irregular patchwork of the preceding 2 hours returns to the forefront of the mind, it is difficult not to feel disappointed by TRUE LEGEND. There are individual moments to enjoy throughout and visually the film displays a playfully kinetic style (when not tinkering with 3D) but it feels far more like a compilation of moments from a number of different films than a single narrative played out chronologically. The final sentiment is that while Yuen's choreography remains inspired, exciting and influential, he may benefit from handing over the directorial reins to somebody with a greater appreciation for building character and more adept at hooking in the audience with an engaging drama.