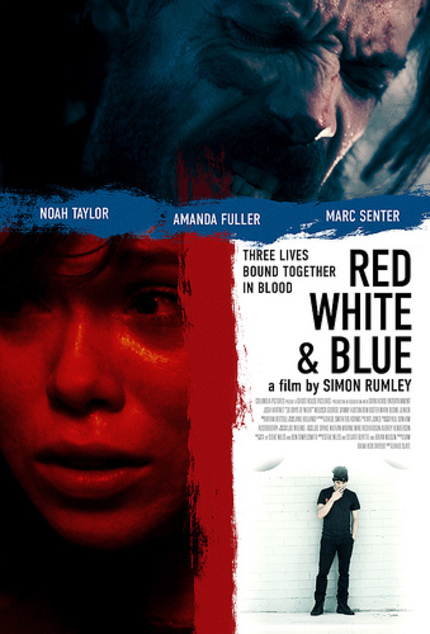 (or: "Sympathy for Everybody's Vengeance"...)

We've certainly had no shortage of news on Simon Rumley's new film "Red, White & Blue" here at ScreenAnarchy. His previous film "The Living and the Dead" was rated highly at our site and made many people sit up and take notice of what he'd do next.
And after many teases and videoblogs, last Friday we finally got to see the full film at the International Film Festival Rotterdam where it had its World Premiere.

Described in all press releases as a "slacker revenge movie", "Red, White & Blue" turns out to be just that but also much more at the same time. People who go in hoping to see a Texasploitation flick with lots of sex and violence will most likely come out baffled. Yes, there is strong sexual content but not for titillation's sake. Yes, there is some VERY violent content as well but not shown in a way which will satisfy the gorehounds.

However, people with a strong stomach who have a taste for gritty, intelligently scripted drama will feel much more at home. Especially if they like to see some truly stellar acting.


I'll keep everything spoiler-free except for the first ten minutes or so. However, if I call this film bleak, do I spoil the ending already? Hmmmm...

Erica is a young woman living in Austin who is very promiscous, picking up men left and right but dumping them immediately after sex, never allowing anyone to get close. This changes when she gets better acquainted with her new neighbor called Nate. He is a quiet man, slightly creepy even but he stubbornly persists in being kind to her.

They start to become friends but if I told what happens next I would be spoiling things. Suffice to say that Erica and Nate both have very different, unrelated pasts, and when these meet things get... painful.

At the start of the world-premiere screening director Simon Rumley gave an introduction, and while confident enough he did seem a bit nervous as well. I can imagine: with "Red, White & Blue" he made a lot of daring decisions with his choice of cast, his style of editing and the pacing of his story.

Beginning with the latter, for a thriller it begins slow. No explanations are given, no timeframe, nothing. You just see Erica doing her thing meaning she alternates between being a bitch and being a slut. She wanders around smoking, cursing and scowling through the day while her evenings are filled with casual sex. Both sides of her are shown in an unattractive and uncomfortably explicit way using an almost documentary fly-on-the-wall style. Harsh lights mask nothing and an ominous score replaces most real sound, to the point where several minutes into the film I even began to wonder if it contained any dialogs at all. And when finally people do begin to speak, it is only to tell others in curt statements what is wrong about them.

All this changes from the moment Nate tries to interact with Erica, and slowly but surely a narrative starts to emerge. As horror-fans we try to see the set-up here. Is Nate a serial killer scouting for his next victim, and is Erica going to be the one?

But this is where Simon Rumley truly starts to play with our preconceptions and successfully dishes out surprise after surprise. Make no mistake: this is no "twist" film, and there are no story-shattering revelations. But what does get revealed is how quick we are to misjudge things when given limited information. And though our initial ideas are not necessarily wrong they are shown to be incomplete, always only covering part of the story.

The people in "Red, White & Blue" are more than just stereotypes or cyphers and it means they sometimes behave in a totally unexpected way. Once you know more about them their actions often make perfect sense, but by that time the set-up already leads to a massive tragedy for all involved...

A big part of this tragedy involves the subject of retribution, and the film never stops challenging your opinions about it. If someone wrongs you, are you entitled to revenge in equal measure? Many people will say yes, but in practice even more people will be in favor for adding a little extra punishment, a last after-kick, a message saying "Don't You Ever Dare Fuck With Me Again". Coupled with the prevailing idea that everyone assumes themselves to be "right" and therefore feel justified to act in any way they see fit (regardless of collateral damage), you get a potentially dangerous mindset.

And, in a decision which many people will NOT like, Simon Rumley links this mindset squarely with the United States of America. All people in the film show the Stars and Stripes proudly, on their clothes, on their cars, in tattoos... and the film itself shows it in the title. Do you feel entitled to shoot a thief when he runs away? Do you feel entitled to kill someone for trespassing? Or for escaping from prison? Or for fleeing when the police yells "STOP"? In many countries these solutions are not even considered. In places like Iceland firearms are considered totally alien, both amongst the cops and the robbers.Yet such violence is seen as normal when America is concerned, and this is an important part of the story.

But Red, White & Blue is thankfully not about country-bashing. It first and foremost shows a drama and spends an admirable amount of effort getting all characters properly explained, to the point where you feel empathy with each of them. When you finally notice that a house of cards is being created, instead of wishing for a cool explosion you find yourself wishing it will not come crashing down.

One of the reasons reason why this actually works is the very good acting from all of the leads. Every main character has multiple layers and all actors portray those convincingly.

Marc Senter may seem the least effective but he has to sell some of the biggest mistakes made by the characters in the movie and manages to do so admirably.

Amanda Fuller is truly excellent as the emotionally damaged Erica and the fact she took this role can be called very courageous indeed. Not only is there a lot of nudity involved but the character is a pretty unlikeable one at the start, making it an upward struggle to earn our sympathy for her. On top of that much effort went into making Erica look as un-glamorous as possible, the camera gleefully focussing on any blemish, spot or zit in sight, especially noticeable when seen on a huge screen (the premiere was in an IMAX-cinema). Amanda makes it look easy though and this role marks her as an actress to keep track of.

And then there was Noah Taylor. Maybe Simon's biggest gamble, but surely his biggest win.

Generally known for playing skinny, geeky, nerdy, but above all FRIENDLY characters Noah Taylor seems the least suitable actor to play the Force-Of-Nature that is Nate. I mean, this is the guy who was chosen for his distinctly non-threatening looks to tell Tom Cruise a difficult message in "Vanilla Sky". Yet if you talked to people after the screening of "Red, White & Blue" last Friday, they kept commenting on how utterly terrifying Noah was in the film (some people even saying how "ripped with muscles" the thin actor was, a funny statement if there ever was one). Noah's work here is very surprising, selling the character in a way I did not think possible. The only performance I recall which comes close is Ben Kingsley in "Sexy Beast". In that film he was a character who had an aura of violence around him which changed the atmosphere in a room when he entered it. And I remember thinking: is this the same guy who played Ghandi?!? Noah Taylor does a similar thing here so in my opinion this is an amazing performance. And if the camera made Amanda look unglamorous, it makes Noah positively leathered and cracked, his face a map of the Grand Canyon with two evil eyes peering out of it.

Moving onto the other aspects of filmmaking: the camerawork and editing follow the unusual structure of the different parts of the film, each of which calls for a specific look. That the different parts still form a coherent whole is quite an achievement.

So is this film an unmitigated masterpiece? Well... no. The story hinges on a few too many coincidences to make it play out the way it does, and if sex and violence are flavors the taste of this film will be too strong for many (a particularly ruthless bit caused some walkouts). But there certainly is plenty to love here, and in the remainder there is still lots to like.

By now you might have gathered that I really liked this film and you would be right. "Red, White & Blue" is a tight little thriller which looks great, is interestingly scripted and structured, and most of all features stellar acting. The real revelations here are Amanda Fuller as a major talent to keep in sight, and Noah Taylor who through his role as Nate summersaults straight into my shortlist of favorite actors.

Very highly recommended but be warned for strong content.

Audiences in Rotterdam liked it as well, granting it a rating of 3.8 out of 5, which I think is somewhat too low.