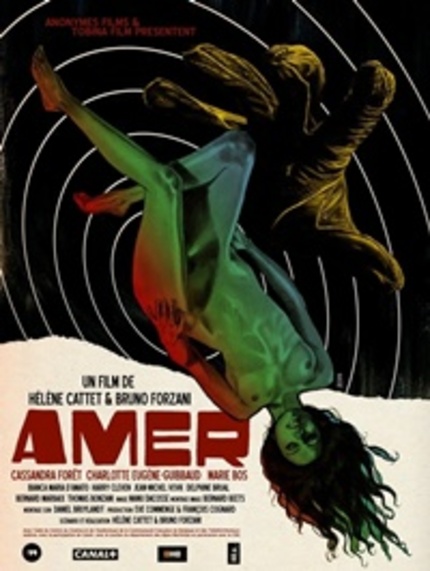 'Amer' marks the feature film debut of Hélène Cattet and Bruno Forzani who already made a name for themselves with award winning short films in which they experimented with still photography, color filters and what can only be called the psychosexual elements of genre cinema. A close-up of eyes, a child laughing, a door closed, creaking leather, a sigh, a straight razor opened, a heart beating and then of course, blood.  Their love for the Italian "giallo" is what mostly shines through in their images and this latest work is no different. With the genre reduced to its core elements they create a visual poetry that engages the senses, a pure cinema where the narrative is a shared experience rather than a tale to be told.

While some good reviews were already out (like Todd's), I was worried that the style of their short work stretched to feature length might not work without adding more conventional narrative elements, reducing the strength of their vision, but luckily the opposite is the case. Their love for giallo hasn't changed since their first short from 2001, but their goal was never to just recreate a specific genre, as is happening more often in these post-Grindhouse days ('Black Dynamite' and 'The House of the Devil' were both also made in 2009). So, staying true to their original strengths they take the time the longer form offers to build up tension and explore a broader spectrum of emotions. Also subtle humor is added when they play with the audience's expectations and add little daydreams into the reality of the movie.

When Forzani introduced the movie saying that "the screen is the eyes, this room with you in it is the skull, have a nice trip!" I knew that my fears were unfounded. And this really is a film to experience on the big screen with a skull full of people. The sound design is an important aspect of this. It's as carefully composed as each close-up or edit and you'd have to own a pretty good system to recreate the full effect of it at home. It's clear they had a real  budget to create their ultimate fever dream this time ('Chambre Jaune' was made with 1000 euro of their own money, but for Amer they raised over 600,000). But even with that budget it took careful preparation to get it done. In the Q&A afterwards they said that in a nine month period preceding the 39 day shoot they not just worked out the scenes but already made the entire feature on DV (with themselves acting) to see what would work and which shots they needed to set up. When asked if that would make a nice extra on a future DVD release Cattet seemed not very eager to share a silly film "with me in pajamas" with the rest of the world.  Another thing of note is the use of old music from Italian genre movies, including that great main theme of 'La Polizia Sta A Guardare' by Stelvio Cipriani which Tarantino also used in 'Death Proof'.

Like so many other aspects of the movie this could be seen simply as a reference to the kind of cinema the two directors love, but the real explanation for the use of these tracks (instead of new music with a similar vibe) is even simpler than that; they conceived of the movie riffing to this music and they worked so long on it that in the end they couldn't think of any other music to take its place.

At the festival there was sadly not much buzz surrounding the movie (it ended up at #141 out of 180 movies in the audience award poll). Maybe because the young directors are so unapologetic about their love of genre-cinema. There is always a part of cinephilic community that holds genre cinema in low esteem and a casual viewer might see the genre cliché's and take the movie for a superficial exercise in style. But think back 80 years when Buñuel and Dali made cinematic history by slicing an eye with a straight razor in 'Un Chien Andalou', look at the Japanese new wave classic 'Eros + Massacre' that was also shown at this year's festival in the Yoshida Kiju retrospective or remember the famous Godard quote "all you need for a movie is a gun and a girl" and it's clear that Cattet and Forzani are hitting the essence of cinema with their explorations of the Freudian sex and death principle. Of all the movies I saw in Rotterdam this year, this sensational slice of sensuous filmmaking offered the most cinematic pleasures. I'm very curious about what the director's will do next. One thing is for sure, this one will be hard to top!

Visit the official site for Amer.
The IFFR-page for this title.