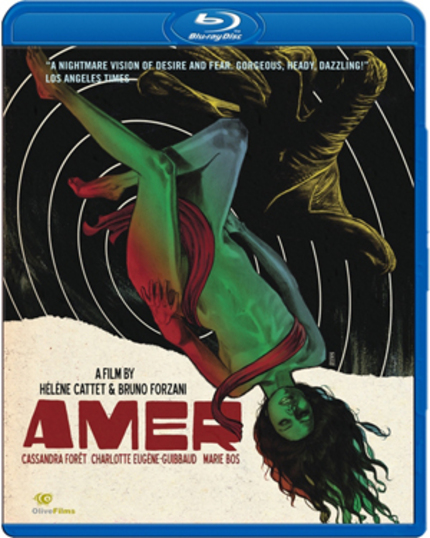 Hélène Cattet and Bruno Forzani's debut feature, Amer, is a staggeringly stylish and vividly disorienting work of art that will leave you gasping by the final frame. Amer is an overt tribute to the giallo films of the '70s and early '80s from masters like Dario Argento, Sergio Martino, and Mario Bava.  The film revels in lurid lighting, delirious in-camera special effects, and labyrinthine plotting in a way that never allows the viewer a moment to relax, ratcheting up the tension inch by inch for all of its ninety minutes.  Already released on Blu-ray in the UK earlier this year, and reviewed by this site, Olive Films has taken up the mantle in the US, and their Blu-ray release is a beautiful and accurate representation and compilation of the work of Cattet and Forzani.

An eroticized homage to 1970s Italian giallo horror films... Hélène Cattet and Bruno Forzani's pastiche tour-de-force plays out a delirious, enigmatic, almost wordless death-dance of fear and desire. Its three movements, each in a different style, correspond to the childhood, adolescence, and adulthood of its female protagonist. Drawing its stylized, hyperbolic gestures from the playbooks of Bava, Leone, Argento and De Palma and taking them into a realm of near-abstraction. Amer has genre in the blood. Its bold widescreen composition, super-focused sound and emphatic music (lifted from original giallo soundtracks), and razor-sharp cuts make for an outrageous and intoxicating cinematic head-trip. Featuring music from composers Stelvio Cipriani, Bruno Nicolai and the legendary Ennio Morricone.

Amer is the story of one girl at three different periods in her life. There is a chapter each on the pre-pubescent girl, the teenaged girl, and the woman. Each chapter is filmed with a different stylistic touch, in order to reflect the work of some of the giallo's best directors.  I could say that certain chapters work better than others, but I think that this would be missing the point.  The film is the sum of its parts, and ultimately left me reeling at the end because of what I'd seen all along.  To separate the film and review the chapters as though they were stories out of a collection, rather than part of a larger whole, would be to diminish the impact of the film and misrepresent my experience.

The film has almost no dialogue, instead relying on the camera and the silent performances of its small cast to relay emotion, rather than story. The small bit of dialogue that does exist is incidental, and has very little impact on the film, apart from a minor conversation at the beginning.  This tact leaves a lot on the shoulders of the cast, who pull off the trick admirably. A large part of the film is shot in extreme close-up, as giallo often were, which leaves a lot of emoting to the eyes, and the eyes have it (sorry, couldn't resist). Equally as often, the camera is the storyteller, and we rely on it to be our eyes in Amer.

The camerawork and lighting of Amer are exceptional. DP Manu Dacosse, is obviously a student of the giallo genre, and knows what he is doing.  Everything from the delirious in-camera swirls to the fast zooming close-ups is period perfect.  The camera focuses very tightly on its subjects and lets the viewer know in no uncertain terms where the action is. The interior lighting is vivid and alarmingly hyper-stylized. There is nothing on screen that Cattet and Forzani don't want you to see, their grasp of mise-en-scene is redoubtable.

The directing duo recycled musical scores of previous giallo films in Amer to remarkably effective ends. There is little dialogue in the film, and almost as little background score, but what there is of the music connects in a very visceral way. This is especially present in the phenomenally tense climax, when the music lets the viewer know that the end is near, and it may not be the end we're hoping for.  Hope is all but abandoned in Amer, the protagonist's struggles with herself and her own sanity/sexuality are at the center of the film's ability to unsettle its audience.

To paraphrase a famously unattributed quote, "writing about film is like dancing about architecture," and with Amer, the case is doubly proved. There is precious little to critique about the film, as it is a matter purely of taste. As I'm sure you can see, my opinion is that this type of film is wonderful, however, if you don't enjoy giallo, you'll probably grow bored very quickly. It is nigh impossible to accurately gauge the impression this film will have on its audience, unless the audience is friendly to the style beforehand.  If you've got a bit of patience, though, I think the fans of artier horror will be rewarded. I will admit that is seemed a bit tedious in the very beginning, but as the film wore on, I became infinitely more engrossed, and ultimately obsessed with the world in which Amer occurs.

The only problem I see is determining where Cattet and Forzani go from here. Their film relies so heavily on homage that it may be difficult to make a break from the giallo form into something else that won't seem derivative of their own work.  With the couple already working on another film called The Strange Colour of your Body's Tears, which is a giallo title if I ever saw one, and a short for Drafthouse Films' omnibus package The ABC's of Death, it seems that they are prepared to stay within the horror/thriller genre.  I just hope they can find a voice of their own with which to express the immense talent they share before they become predictable.

Olive Films have only recently broken into the Blu-ray market, and I believe this is their first contemporary title to be released in HD.  They acquit themselves admirably, with a mesmerizing and intoxicating A/V presentation of Amer that echoes the great works of the masters of the past.  The was shot on 16mm film and blown up to 35mm for projection purposes.  It would appear from the image on the disc, that Amer was transferred from the 16mm negative, which is a good choice.  The image is bursting with detail, and grain lovers should be very happy with the results, as the image is very filmic and doesn't show any signs of digital manipulation that often ruins transfers of smaller film formats to HD. The audio, such as it is, is equally impressive, with the film relying often on sound effects to convey dread, or at least impending peril.  The sound is crisp and clear and the score, when utilized, is bouncy and propulsive in a way that only gialli could offer. A wonderful presentation of this tricky film.

The extras on the Blu-ray disc of Amer serve as a primer in the works of Cattet and Forzani.  One thing becomes clear after watching the 5 included shorts from the pair, they really like gialli. Every frame of each of the shorts, ranging in length from 3 minutes to 20 minutes, can be connected to some part of the film. It seems that these were all simply testing grounds for their ultimate goal of a grand homage to the genre which they adore. Watching the shorts in chronological sequence makes complete sense, and helps to inform the viewer of the goals and influences of the filmmakers, and reassures the viewer that Amer was no accident. Cattet and Forzani knew what they wanted and went for it, balls out, this is how they succeeded.

Olive Films' presentation of Amer is outstanding, as is the film itself. Such a self-assured debut feature should hopefully lead to a big future for these two, if they can either stretch their skills to other genres or expand upon the genre they've chosen.  That is really the only possible stumbling block I can see, let's hope it's not a problem.  Highly recommended!

Order Amer on Blu-ray at Amazon