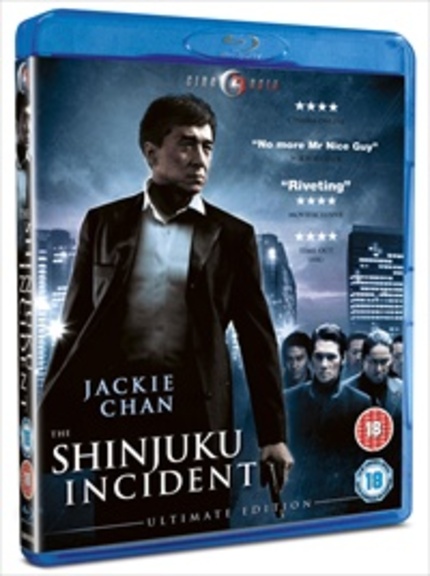 Although I've never really warmed to Jackie Chan's unique blend of mayhem and mirth, I've seen enough of his action pics to be more than a little intrigued by the prospect of him attempting some 'proper' acting. It reminded me of those heady days in the mid 90s when Sly decided that his time machine gunning assorted middle Eastern baddies was over and he'd rather gain weight, take a pay cut and play a partially deaf sheriff. Of course, he's now seen sense and gone back to the weights machine, and in the case of The Expendables, dragged along a few of his mates. Good man.

The Shinjuku Incident sees Chan on similar ground, trying a reinvention (of sorts) which I gather from fellow ScreenAnarchistss is not entirely without merit. The plot goes something like this...

"Hundreds of Chinese refugees wash up on Japan's Wakasa Bay. Each has a dream of a better life, but most will encounter only prejudice and oppression. One, a law-abiding farm-worker known as Steelhead (Jackie Chan), has come to find the woman (Xu Jinglei) he has loved since childhood, but his quest ends in bitter rejection when he discovers she has married Yakuza underboss, Eguchi (Masaya Kato).

Heartbroken, his life descends into darkness and petty crime quickly escalates to murder. With blood on his hands, he will risk everything to secure a future for his people, as they face an increasingly brutal onslaught from a criminal empire protected by a secret code. However, ancient traditions will not be broken and his defiance will lead to all-out war as both factions fight for control of the infamous Shinjuku district in the heart of Japan's greatest city.

Ultimately pursued by forces on both sides of the law, Steelhead must fight for redemption and the survival of those he loves in the darkest night he has ever known..."

Given that he's pretty much exhausted his own oeuvre it seems a fair enough way to go, and any film where JC doesn't kick the shit of everyone in sight has to be worth a look, for novelty value alone. After all, he's probably in training for Rush Hour 4 by now.

The Shinjuku Incident is out on UK DVD and Blu-ray from 22nd Feb 2010 through Cine Asia.
Tweet Post Submit