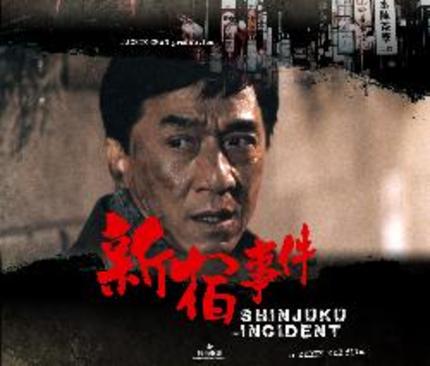 [Many thanks to James Marsh for the following review of Derek Yee's Shinjuku Incident.]

Shinjuku Incident has long been touted as Jackie Chan’s first foray into truly serious acting. Even though such promises were bandied around before the releases of New Police Story and The Myth, those apparently didn’t count because he still did martial arts in them. In Derek Yee’s new film, however, Jackie does not fight, even in scenes where his character probably should be fighting. Jackie also tries hard not to smile, instead wearing a forlorn hang-dog expression for much of the film to prove that he’s taking matters very seriously. As if this wasn’t enough, he appears naked at one stage (albeit from behind) to further highlight his dedication. At this particular moment I felt rather sorry for Jackie Chan. Nicole Kidman, Charlize Theron and Kate Winslet have proved in recent years that “uglying up” onscreen wins you plaudits. Jackie, however, for his big naked moment, has the misfortune of standing next to a similarly disrobed Daniel Wu. Not that standing next to Daniel Wu, even in his birthday suit, would be an unfortunate experience per se, but Jackie’s not as young or as toned as he used to be, whereas Wu is probably at his physical peak. It’s a rather unfortunate comparison the mind is forced to make when the screen suddenly fills with the two bare asses of our male leads, and poor Jackie comes out of the moment looking like a pair of saddlebags. He really is taking this role seriously!

The story is set sometime in the early 90s and Steelhead (Jackie Chan) is an illegal Chinese immigrant in Tokyo. He has come to find work but also to look for his childhood sweetheart, Xiu Xiu (Xu Jinglei). He teams up with a group of Chinese workers, including Jie (Daniel Wu), and numerous familiar faces from Hong Kong Cinema like Lam Suet and Chin Kar Lok, who help him get some manual labour. While cleaning garbage out of sewer drains, Steelhead’s group of workers are chased off by police, and during the scuffle Steelhead inadvertently saves the life of Inspector Kitano (Takenaka Naoto). Steelhead escapes but Kitano now feels indebted to the illegal immigrant. Steelhead also meets bar owner Lily (Fan Bing Bing) and a turf war is brewing in Shinjuku between rival Yakuza gangs and when Steelhead recognizes the wife of mob boss Eguchi as none other than his beloved Xiu Xiu, he can no longer resist the urge to get involved.

Derek Yee has built an excellent reputation for himself since moving behind the camera after a long career as an actor. His recent directorial outings, namely One Nite in Mong Kok and Protégé, have displayed a detailed knowledge and understanding of the day-to-day mechanics of the Hong Kong underworld. Both films also blend taut action and drama with sentimentality and moments of extreme violence. Shinjuku Incident continues this trend on all counts. The film features a number of well executed action set pieces, from Steelhead’s early flights from the police to a brutal final siege on the Chinese gang’s headquarters by vengeful yakuza. The film also includes a couple of particularly gruesome moments, to rival the severed hand or doorknob sequences in the films previously mentioned. Unfortunately for Jie, these moments invariably happen to him, despite his proclamations early on that he is not cut out for a life of crime. In fact, it is these violent acts against Jie that also lead to the more melodramatic and sentimental moments in the film. They have also got the censors sharpening their shears and Yee has opted to snip out a couple of overly graphic moments to secure a more audience-friendly IIB rating in Hong Kong. The demands of Mainland censors also persuaded Yee not to pursue releasing the film in China – a move that might cost him and his investors dearly, even if it does protect his artistic integrity.

The cast acquits itself respectably, with Jackie Chan mostly convincing in his role, even if he can’t always carry off the more theatrical moments the script demands of him. Every time a scrap breaks out it is jarring not seeming him dish out the whoopass, and actually playing up being rather ineffectual in a skirmish. Daniel Wu survives a dodgy perm, which later makes way for a frankly ridiculous wig, but his role never amounts to much more than a shit magnet as he repeatedly attracts violence and the wrath of rival gang members. Takenaka Naoto is also rather good as the schlubby cop who can’t quite decide whether to bust Steelhead or watch his back.

Shinjuku Incident is a pretty decent film, but nothing more than that. There is nothing great about it that really lingers in the mind for very long after it finishes. The story isn’t boring but is never anything other than conventional. It also seems to forget about some of its characters as it busies itself staging an unnecessarily violent finale, and ends with a captioned “afterword” that juxtaposes the dramatic weight of the film’s coda by being unintentionally funny.

In short, this is no acting renaissance for Jackie Chan in the way, say, JCVD has been for Van Damme. It shouldn’t put him off taking more non-action roles in the future, but one can’t help but feel he has left it too late to truly reinvent himself.