Sundance 2010: The First Clip From Chris Morris' FOUR LIONS Demonstrates How Not To Buy Bleach. 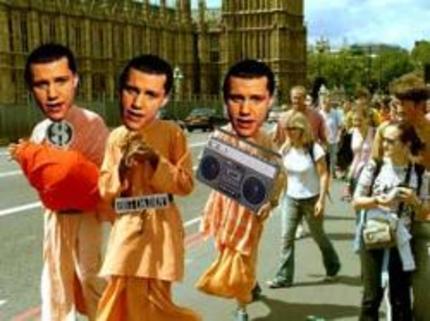 There are many problems unique to the life of a domestic terrorist trying to build a home made bomb. Such as, for instance, how to collect the materials you need without drawing undue attention to yourself.  Chris Morris addresses this matter in the first clip released from his terrorism comedy Four Lions.

Yep, the man who sparked mass protests with a mock-news broadcast on pedophilia is back with what may be his most incendiary outing yet and after keeping everything out of the public eye for a good long time the fist clip of footage has been released via the UK's Guardian website and it's a good one. If the style of comedy feels familiar to fans of last year's Sundance hit In The Loop that'd be because Loop creator Armando Iannucci and Four Lions creator Chris Morris have been close collaborators at a number of points through their careers and, between them, are largely responsible for creating the hyper-realistic, awkward-comedy style that vaulted Ricky Gervais to fame with The Office.
Sign-In to Vote
Tweet Post Submit