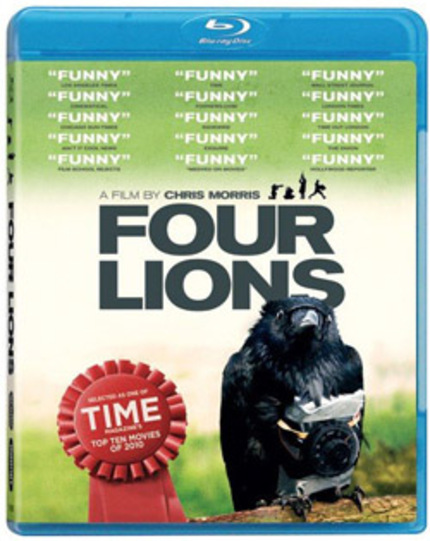 When I first opened the envelope containing Four Lions, I was immediately struck by the cover you see at left.  Normally a DVD will have some kind of blurb on the front or the back from someone like Peter Travers, who writes reviews for the explicit purpose of getting his name on movie posters and DVD covers, but this is different.  As you can see, there is not one blurb, but fifteen quotes all with the same single word, "funny".  Could the film possibly lead up to its impossibly hyped cover image?  Thankfully, the answer is yes.

Four Lions is the story of the sleeper cell that couldn't shoot straight.  Four men, soon to be joined by a fifth overly ambitious youth, embark on a suicide bombing plan to bring jihad to London.  From the very first frames of the film, we can tell this is not a good idea.  The film opens on Waj (Kayvan Novak), a dimwitted but very sincere young man intent on bringing fear to the unbelievers and intent on turning them into "baked beans" by way of explosion.  Waj is recording his jihadi suicide video, you know, the ones that always pop up after a big suicide bombing, but he's having a hard time getting it right.  He stutters, he pauses, and eventually, in order to make himself appear more menacing, he whips out an AK-47.  The only problem is that its a toy gun, about a quarter scale, and it looks absolutely ridiculous.  Rather than abandon the video, Waj insists he can make it work by simply moving closer to the camera, which looks even more ridiculous.  This is the crux of this cell's problem, they are inept at best, and stupid at worst.

Each of the members of the cell has their own personality and is allowed to develop in their own time, as well as can be done in a farce like this.  There is Barry, the white man who has converted who, like all recent converts, feels as though he must be twice as angry as a natural born Muslim in order to keep up.  There is Omar, the apparent leader by virtue of his connections to terrorist camps in Pakistan and his relative intelligence who goes home at night to a wife and son who are both completely supportive of his dream of jihad.  There is Fessel, the goofball stoner type who tends to work behind the scenes on his plan of arming hundreds of crows with suicide bombs to attack office buildings.  Last of all, there is Malik Hassan, a young Muslim rapper intent on becoming a real terrorist, to the extent that he'll suffer the most cruel, and hilarious, indignities Barry can think up to prove his commitment.

Four Lions is a comedy of errors, and with this crowd, they happen at every turn, whether it is blowing up the wrong guys at a Pakistani training camp or pratfalls, it is all the same, and done with a brutally flat sense of humor.  The characters all play the film straight, which is what makes it so goddamned funny.  Just now, as I'm writing this, I'm reading through the "memorable quotes" section of IMDB and laughing my ass off all over again.  You have to see this film to believe it.  Terrorism isn't funny, and this film makes no attempt to make you feel that it is, however, it does give the terrorists names and dreams, and allows them to shatter those dreams all by themselves.

The film is fucking funny, there is no doubt about that.  It tackles very sensitive material and hits every beat, walking a very fine line between satire and insensitivity.  We almost sympathize with a character like Omar, because he is trying hard to make something work, even if that something is mass murder.  We definitely sympathize with Waj, because he is simple.  He is Lenny to Omar's George, we feel he must be protected, even as he dons the bomb belt, ready to take out anyone and everyone in his path, it is only because he wants to be good at something.  We don't sympathize with Barry, but every film must have a villain.

I found myself enjoying Four Lions far more than I expected to, and I suspect that is its strength.  I don't know what kind of expectations one should have going into a film that is labeled and marketed (correctly) as a comedy about terrorists.  But whatever expectations you have, I can't imagine this film not meeting them.

Four Lions was filmed using a number of different methods.  The vast array of media, from SD home video to night vision spy cameras, Four Lions' picture quality is all over the board.  I can say that I believe the presentation on Magnet's Blu-ray is absolutely accurate.  The film is not exactly a visual tour de force, but ever image serves its purpose and there are no distracting problems with the visuals.  The audio fares a bit better, with a DTS-HD MA 5.1 track that delivers clear and precise dialogue with random moments of ambiance in the Pakistani desert sequences, as well as some good motion around the sound field during the few action sequences.

Magnet has included a couple of interesting contextual extras to Four Lions that help bring the subject matter home.  First is a nine minute featurette about Muslims growing up in England that is a snapshot of the feelings and emotions of young Muslim men living in a land which does not welcome them, despite their being born English.  The other is a relatively brief interview with accused, and acquitted, terrorist Mo Ali.  Ali explains how he came to be incarcerated, explains how he sees the plight of the Muslim in the Western world as a person doomed to eternal suspicion.  It is pretty sad, and while I wouldn't say it inspires sympathy for those who do turn to jihad, it certainly opens a small window into a world where that might not seem like the worst idea ever.

Less consequential, though much funnier, extras round out the package, including some great deleted scenes, and a couple of fluffy interviews with cast and crew and some behind the scenes stuff.  Not terrible, definitely amusing, but certainly lightweight when compared to the "background material" provided on the disc, which is the real treasure among the bonus features.