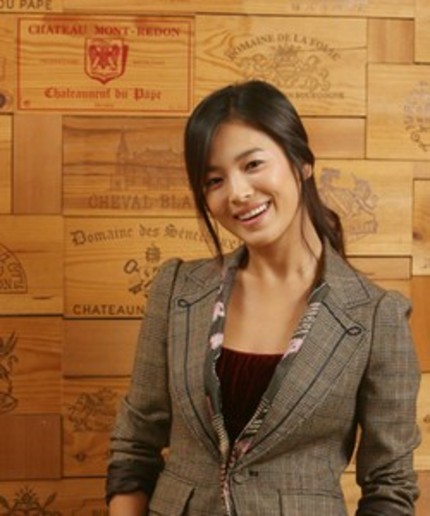 Ha... Last time we dealt with Miss Song, quite the peculiar shitstorm ensued: we snarkily mentioned a Chinese news report claiming that Song Hye-Gyo and Wentworth Miller would join Donnie Yen and Tony Jaa's 急先锋 (Vanguard), then some Korean "journalists" passed our piece through the good ole Babelfish, which likely made them believe we had some kind of scoop and it was all signed and ready to go (of course, it wasn't the case). Song's management was clearly ticked off by the news, claiming they hadn't heard a thing about the project, making it the umpteenth case of Chinese media playing wishful thinking. But this time we can safely say it's not the case, as Wong Kar-Wai has just cast Song Hye-Gyo for his upcoming Yip Man biopic 一代宗师 (The Great Master).

Song's management tried to keep this under wraps, but the news was leaked today by the Chinese media, after which the management responded that they couldn't reveal any detail, but Song was indeed preparing her Chinese film debut - she made her Korean film debut in the maligned melodrama 파랑주의보 (My Girl & I) in 2005, after finding stardom through her TV roles. Song reportedly left for China early this month to undergo some action training, with photos of her training with co-star Zhang Zhen leaked by the Chinese press. But this is not the only international project Song will participate in, as she's set to work with another major director, announcement which will come pretty soon. I suppose Wong cast her more for her popularity in China and Asia -- she was one of the very earliest adopters of the Korean Wave star canon, when her 2000 TV drama 가을동화 (Autumn Fairy Tale) made it huge across the entire Chinese speaking market - than for her acting skills, but it's certainly not the first surprising choice Wong has made throughout his career. So Tony Leung, Zhang Ziyi, Zhang Zhen, Song Hye-Gyo and Zhao Benshan are confirmed, with many more names mentioned by the Chinese press on an almost daily basis as possible late comers.