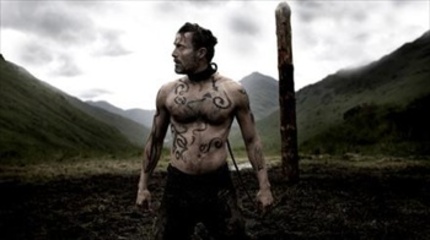 A metaphorical journey through a mythic landscape, Nicolas Winding Refn's follow-up to Bronson is a bewildering Viking tale. In the Scottish highlands change is coming for the Pagans in the form of a Christian-led crusade, on a mission from God to reclaim the 'Holy Land'. Sparse, vivid and bleak, Valhalla Rising focuses on the mute 'One Eye' (Mads Mikkelsen), enslaved to fight for money in brutal unarmed combat. Breaking free from his captors, and accompanied by the young boy who tended to him between fights, he joins a group of Christian warriors as they embark on a pilgrimage to build a "new Jerusalem".

Refn pursues the expressionist leanings of Bronson in a film that bends genre boundaries to create an other-worldly dissection of fanatical religion and the wild landscape its followers inhabit. Thematic exploration, form and style increasingly dominate over classical storytelling as the group gradually fall foul of forces beyond their control. One Eye (according to Refn) can be seen as a "spirit" that appears in times of religious turmoil, and seen in this light the film makes most sense. As the journey toward the Holy Land turns bad, the Vikings are all too eager to project their own fears and beliefs onto this unstoppable warrior, finding religious and superstitious symbols in everything. His motivations remain unclear - he's abused and manipulated by those around him, but never conquered, allowing whatever projections that are imposed on him to stand unchallenged, whilst maintaining underlying control throughout. Sometimes through violence, other times through eerily silent persistence, an ironic progression ultimately sees One Eye become a hellish Messiah, followed up the mount, disciples in tow.

Aesthetically, it's a wonder. Shot as a hyper-real nightmare on digital cameras, Refn creates a striking quasi-historical natural world of greys and greens, punctuated with hellish reds - One Eye is believed to be from Hell itself such is the efficient savagery of his fighting. Characters have god-like auras around them, and a thumping electro-rock soundtrack is both mesmeric and extremely disquieting. Refn uses the widescreen aspect to full effect, framing weather-beaten Viking faces in close-up at the very edge of tremendous cloud-filled vistas; epic, inspiring and grandiose.

Packed to bursting with religious, mythic and historical allusions, Valhalla Rising has much in common with this year's other Danish head-fuck, Antichrist. Aside from the more obvious and literal similarities - the chapter markers, a metaphorical journey into a hellish natural world, the oppressive, foreboding score - it shares that film's frustrations and playful nature. Themes and allusions are thrown around with wilful abandon and it feels like Refn has struggled to construct something from all the (admittedly impressive) footage once in the editing suite. In an entertaining Q&A after the screening, he admitted as much. Whilst the ambiguity can be alluring, it also leaves you feeling a little cheated, unsure of the director's motives in the first place.

Taken as an experimental, abstract piece it's both kinetically exciting and thought-provoking, but it's also a stage in Refn's evolution that, whilst avoiding the mannered stylistic onanism of Bronson, begs for a more cohesive approach.