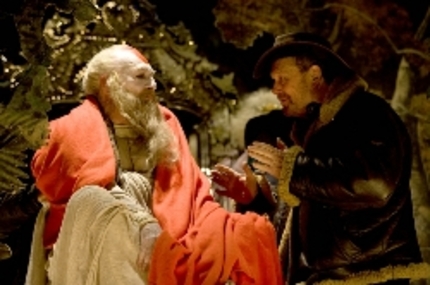 On the eve of Terry Gilliam's The Imaginarium of Doctor Parnassus' North American premiere at the Toronto International Film Festival three extended clips from the film have been made available to local press.  These are the same clips that turned up in France prior to the film's debut in Cannes but the quality is much better than the versions that surfaced online then.  Here's how the festival describes the film:

Terry Gilliam and his boundless imagination return to the Festival with a film already enshrined in cinema history as the final work of Heath Ledger. When Gilliam made the inspired decision to bring in Johnny Depp, Jude Law and Colin Farrell to amplify Ledger's unfinished role, a work of fantastical storytelling unexpectedly evolved into a glorious tribute to the terrific young actor. If there's a surprise here, it's in how beautifully Gilliam weaves the fantasy and the tribute together.

The Imaginarium of Doctor Parnassus - the title smacks of fable and adventure, and the film delivers. In a sly performance full of his usual robust energy, Christopher Plummer plays a trickster showman in contemporary London, putting on acts with the aid of young Anton (the phenomenal Andrew Garfield from Boy A), his loyal friend Percy (Verne Troyer) and his beautiful daughter Valentina (Lily Cole). Their seemingly shabby shows involve antiquated tableaux that conceal the real deal: unsuspecting audience members are pulled onstage and sent through a magical mirror into a gleaming, surreal other world.

But it's a desperate game. As a young man, Parnassus made a pact with the devilish Mr. Nick (Tom Waits, sporting a debonair pencil-thin moustache), and thus began a centuries-long battle of wits and wagers in which Parnassus is granted powers - immortality and the ability to guide the imaginations of others - but at great cost to himself and risk to his daughter. When the troupe rescues Tony (Ledger) from London's streets, he joins their tottering sideshow, but he may not be who they hope he is. And now Mr. Nick is back to collect a debt.

Find the clips - and a fresh behind the scenes reel - below the break!

More about The Imaginarium of Doctor Parnassus