TIFF 09: THE IMAGINARIUM OF DR. PARNASSUS 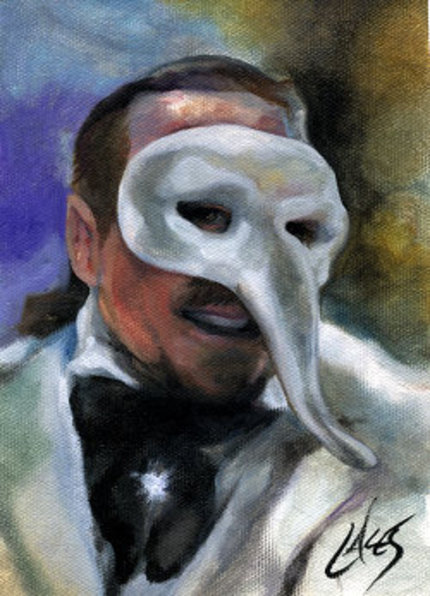 A question: "Where are we - geographically, socially, narratively?"
A snappy reply: "The northern hemisphere, on the margins, further to go."

There are three great surprises of The Imaginarium of Dr. Parnassus. The first is that Terry Gilliam is back in top form, weaving the contemporary and the fantastical into a whimsical and dark package. Despite the death of Heath Ledger occurring in the middle of production, that which forced the subsequent hiring of Johnny Depp, Jude Law and Colin Farrell to complete the part, works charmingly well in the film. This second surprise is so deeply woven into the plot that it looks like this was the intent all along. The third one, perhaps the most surprising of the bunch, is that Terry Gilliam has commandeered the digital effects so effectively that the film retains its nostalgia simultaneously to looking modern. The films deceptively simple plot forms serves to evoke the best of former Python's directorial work and at the same time (or so I am told) close up a loose trilogy of the imagination starting with fragile innocence of Time Bandits, carrying forward to the full blown exuberance contained in The Adventures of Baron Munchausen and reflecting on mortality, wisdom (with more than a hint of melancholy) with Dr. Parnassus.

The story follows the eponymous Dr. Parnassus (Christopher Plummer at his most sublime) and his raggedy show which consists of his long-time companion Percy (Verne Troyer), his 15 year old daughter Valentina (Lily Cole), and her friend Anton (Andrew Garfield). They travel around London attempting to rejuvenate the imaginations via the Doctors magic mirror to whomever is willing to drop a few shillings in the basket. Despite the decrepit poverty of the bunch, this is not idle amusement. Dr. Parnassus has a deal going with the Devil (Tom Waits embodies pure Machiavellian fun in this plum role) involving the betting on peoples souls in the world behind the mirror. One of the conditions of the deal is the good Doctors immortality, the other involving his daughter on her sixteenth birthday. In drops Tony, played by Heath Ledger and morbidly introduced hung by the neck (although he dangles as if waltzing on air) and referred to 'the hanging man' via tarot cards. Revived by Parnassus' travelling players he becomes the narrative wild card and eventually the lynch-pin to the fiendish wager between the Devil and the Doctor as it escalates during the birthday countdown.

Taking storytelling and imagination to great heights, while simultaneously reflecting on the value of shooting for the stars, this might just Gilliam's most self-reflective movie. Contradictions such as the immortality Pernassus and the repeated statement that 'nothing is permanent' embody the spirit (and modus operandi) of this particular story teller. Heath Ledger's death was both a major obstacle in the realization of the film; misfortunes of this kind seem to follow Gilliam whatever he does, whether it be the financing, health of star Jean Rochefort and extreme weather of his failed Don Quixote project (which not surprisingly has been revived once again), or the executive interference on Brothers Grimm and Brazil. It ups the ante on making the whole thing work, which miraculously becomes a boon to the film, not just in inevitable bonus box-office from the ghoulishly curious folks showing up in the wake of all the E! coverage of Ledgers death, but because the circumstances forced on Gilliam by the loss of his star has yielded an interesting visual and narrative avenue with the character of Tony. It works. There is a joyous sloppiness to all of Gilliam's films, not unlike his Monty Python animations, and here harnessed without being neutered. In short, the actor-swap-idea looks planned from the get go, making the Imaginarium of Dr. Pernassus and impressive artistic revivification.

As much as every eye will be on Ledger during the duration of the film, it is really Christopher Plummer who steals the show as the drunk and cantankerous Doctor. A man who realizes the pickle he has put himself into with both noble and selfish intentions. He carries the weight of his many, many years yet has a desperate optimism buried down deep, and Plummer brings all of his talent to bear in a subtle realization of an interesting character. Similarities of Dr. Parnassus to the director is entirely intentional. There are plenty of storytelling horizons to explore. Ahem. 'Further to go.'

The Imaginarium of Doctor Parnassus

More about The Imaginarium of Doctor Parnassus