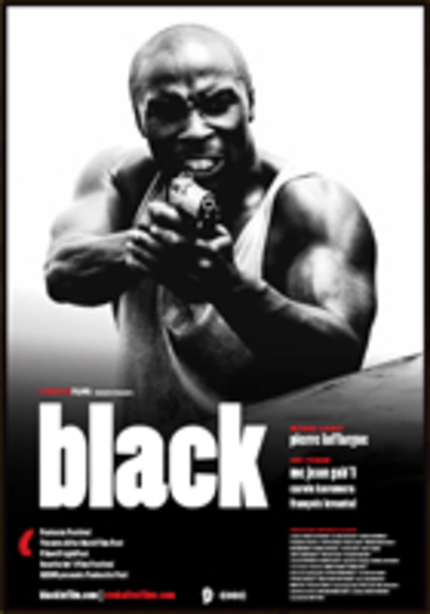 A second viewing of Pierre Laffargue's kitchen-sink genre-mash cements the notion that if there is a reasonable successor to John Carpenter, albeit with more global leanings, Laffargue is quite possibly the man. While not as overtly funny as something like Big Trouble in Little China, his continent hopping heist film throws bank robbers, machete wielding pro-wrestlers, Snake Witches, Russian Mercenaries, loose-lipped bankers and sexy interpol warrior-goddesses all smoothly into the blender together and then, for the hell of it, hits frappe. To say that Blacks weaving and dodging plot is a mite unpredictable and crazy is the understatement of the year.

Opening in Paris with a spectacularly botched bank heist where only one of the robbers escapes slaughter by the authorities by jumping onto a high-speed train, it marks a fitting transition for musician/actor MC Jean Gab'1 from bit-player in the Banlieue 13 films to full blown star. After contemplating giving up the life of high-stakes thievery for about a nanosecond, he gets a phone call from a cousin down in Senegal with the promise of a choice score. A fistful of thumb-sized uncut diamonds is sitting in the vault of a Dakar bank which happens to have not too much security. So, gathering up a new gang of Parisian heavies, Black makes his way down to Africa for an easy payday. In the meantime, in one of those great split screen sequences in many a Blaxploitation or Brian DePalma film, word of these diamonds spreads and the local arms dealer and his best customer, a Russian Jack D. Ripper-type psychopath with a penchant for red faced rage also pick up the scent of quick cash. More parties get involved as the film clearly shows why the phrase blood diamonds is an accurate descriptor.

There is a musical cue in the opening moments of the film involving a funkadelic cut of Strauss' Also Spach Zarathustra. It is a big clue to the genre-mash sensibility of high and low cinema Pierre Laffargue and team are playing with. There is a touch and go playfulness on display that flirts with being familiar yet in execution comes out fresh and more than a bit unhinged. All the badass and goofy spirit from Big Trouble in Little China, Lock Stock & Two Smoking Barrels, and of course the gamut of Blaxploitation cinema has been channeled through a righteously bombastic musical soundtrack that should have the late Isaac Hayes grooving in the afterlife. Let's face it, the film is a rolling ball of smooth energy and its where the heck is this going to go from one scene to the next is its key strength. I will not ruin it, but pay attention if you can, its all pretty much there on display from the get-go, even if that will not quite prepare one for the baffling places it goes during the climactic show-down. Suffice it to say, you get a whirlwind tour of the ins and outs of urban and rural Senegal without the usual western political or poverty rhetoric. Black is all about pounding out tunes while transitioning from one badass heroic action set-piece to the next.

MC Jean Gab'1 gives a ferocious yet still vulnerable performance essaying a man who can think fast on his feet (or between the sheets), even as chaos reigns supreme around him (some of it of his own making, much of it just seems to happen around him). And his lady-foil, played charmingly athletic by Carole Karemera, is the sassy Interpol agent who comes across like a chocolate Uma Thurman in a Quentin Tarantino picture (and Jackie Brown and elements of Kill Bill are also a links between DePalma and Blaxploitation), exudes competence and sex, but stills needs a helping hand (or caress) every now and again. Fun genre efforts like this do not seem to be made as much these days where special effects or martial arts rule the day. Old school in execution, but modern in its sense of locale and culture fusion (call it glorious art-trash!), gritty on-location madness like Black should be celebrated by viewing with a large pitcher of cold beer and a spicy plate of Yassa.