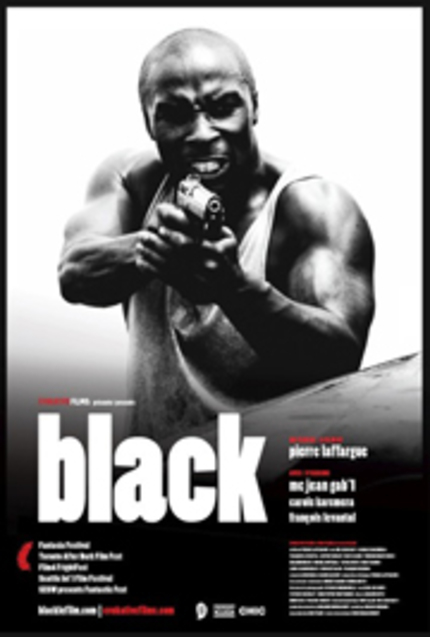 It's all about confessions today (after Embodiment of Evil last night I feel dirty). Thanks to Canadian distributor Evokative Films I have had Black for some time now and have been able to watch it more than once. At first, I didn't fully appreciate it but it does get better with repeat viewings and what will be presumed as anarchy actually flows nicely once you're familiar with it.

Black is getting over a disastrous payroll heist in Paris when his cousin Lamine calls him from Dakar. Turns out a briefcase full of uncut diamonds has just been deposited in the bank where he is a guard. Black quickly gets together a new gang and flies to Senegal. They hastily formulate a plan, buy weapons and wait for the right time to rob the bank and escape back to Paris. However, they aren't the only ones interested in getting their hands on these diamonds. They'll have to get to them first before the arms dealer, the mercenaries, the Interpol agent and the corrupt bank director do. Black is a heist film like no other, a film that marches to the crazy beat of its own drum and funkadelic tunes.

Black surges like a stubborn child who is well aware of their roots yet is still determined to plough their own path through life and do things their way, stomping their feet all the way out the door. In his review Kurt mentioned the use of funky rendition of Strauss' Also Sprach Zarathustra during the opening credits and it is so appropriate. It says a couple things. This is going to be a big movie! And, this is going to be a funky movie! Right on both accounts. Ambitious and groovy, Black is a big gooey gobstopper rolling at breakneck speed in its swirling colorful glory, picking up these random characters and antagonists on its perilous plight. And once every rotation these colorful characters emerge from the dust of Dakar reaching and grasping for that velvet bag of uncut diamonds.

Gábor Rassov's script crusades through the streets of Dakar with reckless abandon. He filled his world with only the most colorful of characters ranging from Russian mercenaries, Senegalese wrestlers, mystics, and an arms dealer with a bad case of Ecdysis. Add all of these characters together and simmer under the heat of the Senegalese sun and our puppy dog faced bank robber has no choice to but to look over his shoulder at every turn. The pompous Parisian suddenly finds himself out of his element and out of control of the situation. Enter the striking, physically and physically if you catch my drift, Interpol agent whose own plan to intercept these contraband diamonds he bungled and the day just got a little hotter. Rassov's script and Laffargue's direction casts our duo from one dilemma to the next, running through the night avoiding the sting of Kalashnikovs and machetes, until they discover that the universe has other plans for them other than just the diamonds.

Pierre Laffargue directs with raw enthusiasm which captures the energy of the script with an often nostalgic feel of 70s and 80s action cinema. At times all we can do is grab the tail of the lion and panther waiting to see where they'll take us next. I love that his car stunts have that 80s cop show staged feel to them, that the camera is anticipating that something big is going to happen, that there is going to be a big burnout or skid stunt, and waits, anxiously, just a few seconds more for it to happen. I love that the mercenaries shoot from the hip and spray and pray. I love that despite all the planning and preparation that Laffargue still manages to have made a film that feels rough around the edges like those uncut diamonds in the suitcase.

Under that rough exterior lies something beautiful and valuable.

Toronto After Dark runs through to Friday, August 21st. Check the official site for screen times!