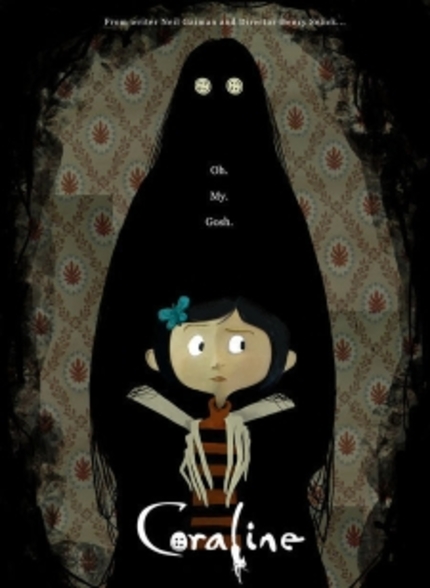 While fellow ScreenAnarchy-writer Kurt is already looking out for a DVD release, us poor Belgians finally got to watch this film in theaters. Coraline opens today in Belgian theaters, last Sunday I attended the avant-premiere, a good four months after the world premiere. *sigh*

Selick is somewhat of an unfortunate director. Even though he sculpted an immensely popular film, he failed to receive the creative recognition for it. As the director of Nightmare Before Christmas, he saw most of the credits go to Tim Burton (who many believe directed the film). Selick's later films didn't really make much of an impression, but with Coraline he was more than determined to get his revenge. After four years of high expectations, Selick finally delivers.

Ever since the first images of Coraline surfaced on the web, people have been anticipating Selick's new baby. An anticipation that only grew with the arrival of teasers, trailers and behind the scenes footage. Add to that the inclusion of Neil Gaiman, cult favorite writer of the original script (which he sent to Selick even before his book got published) and welcome help on set. So with four years in the making, you have a project that is almost doomed to fail because of all those high expectations and talent involved. Lucky for Selick he proved himself a worthy captain.

Even though I quite like Neil Gaiman's work, the story is easily the weakest link in Coraline. It's a rather old Alice-like tale of a mystery mirror world housing some not-so-friendly creatures. Of course with its own little twists, but nothing really earth shattering. Coraline is a young girl who has just moved to a new house with her family. She finds herself in a strange environment, with two parents unable to free time to listen to her worries. She tries to entertain herself, and while exploring the house she hits a mysterious hidden doorway. There's nothing but a brick wall behind the door, but when she's finally alone the door opens a portal to a mirror world, reflecting her every dream. It's nothing we have not seen before and ends up floating somewhere between the worlds of Lewis Carroll and Roald Dahl. The ending might have been a little darker than usual for what is basically a childrens tale, but apart from that there is nothing most 6-year olds will be scared of or be puzzled by.

Visually though, the film is quite something. It is almost impossible to believe everything in it was made by hand. I went looking for information on the net about traces of computer work but couldn't dig up much. Apparently everything on screen was made by hand, painted by hand and shot with a camera. The animation of the characters is magnificent, Coraline being the most agile of the lot (and incidentally sporting a couple of tics/expressions not quite unlike Ghibli kids). The character design of some of the secondary character felt a little less pleasing, namely the Russian circus artist and the two old ladies. I believe their designs did not match as well with the main characters and look of the film, probably feeling more at home in a film like Triplettes de Belleville.

Another, somewhat bigger issue for me, is the rather inconsistent use of screen real-estate. Some shots are packed with details, others can be quite bare and minimal. I realize Coraline's family has just moved and probably not everything is unpacked yet, but some backgrounds did look really empty, something Selick's direction couldn't always hide or use to its advantage. It's a feeling that popped up several times while watching the film and did leave a little mark on the visual side of things. But setting that aside, Selick's visual accomplishment here is impeccable and a true delight to behold.

The score of the film is not bad, but not all that good either. I'm glad they left Danny Elfman out of the boat and I was delighted they stayed clear from any musical ideas (there is only one and a half songs present and they are worked pretty well into the storyline), but Coulais' score is still a little bombastic and can be a little too present. I would've preferred a slightly more subdued score, more in line with the darker feel of the film. But since this is essentially still a film targeted at a younger audience I can understand the choices they made while scoring the film.

Coraline is definitely a must to see on big screen, though I'm not able comment on the addition of the 3D element as I watched the regular version. The attention to detail, the level of animation and the camera work are all ridiculously amazing. Character design is a little fickle, with Coraline, the witch and Wyborne's bicycle setup being pretty awesome, but some of the secondary characters coming of as a little out of place. The story is typical "more mature" kid's fare with some darker twists at the end of the film, but overall not really charming enough to keep me interested throughout its entire running time.

Whether you prefer Coraline over Nightmare Before Christmas depends on several things. For me, the fact that Coraline isn't a musical really made all the difference. Above that, the visual side of Coraline is definitely more impressive. But I'm certain true Burton fans might miss the Elfman score, the typical Burton touches and the more carnivalesque world of Nightmare Before Christmas. Leaving the comparison for what its worth, it must be said that Selick really did a great job with Coraline, away from the protective wings of Burton, and will hopefully receive all the credit he deserves.

If you get the chance to see this in theaters, I advise you to do so. And if a DVD becomes available, it's probably best to pick the one with the most extensive making of feature available. The film itself is a great watch, there is plenty to marvel at, though in the end it does feel a little lost between its darker edges and its kids appeal. Still, recommended viewing.